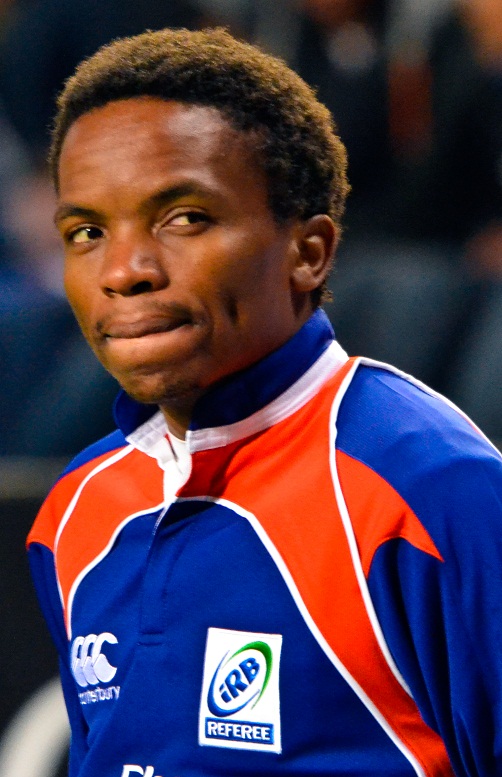 Morgan Piek – In recent years young Rasta Rasivhenge has made a big name for himself in South African Rugby as one of, if not the finest young referees. Having proven himself on the HSBC IRB World Sevens circuit and our local Steinhoff Varsity Cup, Rasta was recently awarded with a step-up and selected as one the referees to officiate in the World’s oldest domestic rugby competition, the ABSA Currie Cup.

Even more impressive was the fact that he had been given the honour of being the referee in the first game of the 2012 Currie Cup season when the Vodacom Blue Bulls hosted the GWK Griquas from Kimberly at the Bulls fortress, Loftus Versfeld. A remarkable testament to the young referee’s abilities indeed.

What makes him such a good referee? Many players will tell you first and foremost a referee must be consistent. That Rasta certainly is, apart from his consistency, he is an incredibly confident young man whose communications levels on and off the field are second to none.  Thirdly, Rasta has a brillaint understanding of the the laws and interprets them very well.  In my line of work I deal with and speak to players on a daily basis and I’m yet to come across a player that has had a bad word directed towards Rasta. Believe you me, not all referees in South Africa are liked by the players.

At the rate at which Rasta is climbing the refereeing-ladder, it won’t be long before he will take charge of his first Super Rugby game. Having said that don’t be surprised if you see Rasta named as one of the referees to take part in the 2015 IRB Rugby World Cup in England.

Earlier today I had some time to catch up with Rasta and ask him a few questions.

Rugby15: In recent years you’ve been travelling the World with the HBSC IRB Sevens circuit, which of the host countries is your favourite and why?

Rasta: I really enjoy all destinations but I must be honest the best place is Hong Kong as it is one of the most interesting places to travel to, I’m a shopaholic and Hong Kong was the ideal place for me to shop. Also adding to this is the different types of foods, the people and the place itself. Hong Kong is the pinnacle of Sevens and I feel it’s the best place to referee.

Rugby15: How has refereeing on the Sevens circuit impacted your career and what is the most important thing you’ve learnt officiating Sevens?

Rasta: Sevens has helped my refereeing in many ways, from handling pressure games, enjoying the moment and improving my accuracy. It has helped me mature as a person and I enjoy it so much as there is so much to learn from it. The coaches are so helpful and willing to assist in any aspect which has helped me learn how to deal with crucial situations, with pressures both internal and external.

Rugby15: Recently when I spoke to you, you mentioned to me that you were nervous about you first ABSA Currie Cup game.  This past Friday you refereed the 2012 ABSA Currie Cup opener between the Vodacom Blue Bulls vs. the GWK Griquas at Loftus. What difference was it to the Steinhoff Varsity Cup and how was the whole experience?

Rasta: I really enjoyed my debut as this was a moment I will cherish forever – Currie Cup carries a lot of tradition, culture and has a reputation that is amazing. It is fast paced with lots of skill and the collisions are frenetic. The atmosphere around it is something special because of all the traditions and I always wanted to be part of this. The Steinhoff Varsity Cup is also an amazing competition as it brings a different culture and it is currently forming some exciting traditions that are different to the Currie Cup. It is also fast paced with loads of skill and the whole student vibe is special. Both Currie and Varsity Cup are great for SA rugby.

Rugby15: It must have been slightly intimidating doing your first Currie Cup game with arguably South Africa’s finest referees Craig Joubert running the touch lines, did that add to the nerves? What advice did Joubert give you beforehand?

Rasta: Craig Joubert is an exceptional man, I was nervous and comfortable at the same time, he is my peer, coach and mentor so it made it easier for me to be with him. It was an honour to have him on my debut as I am grateful he shared this special moment with me.  He just told me to go out there, enjoy the moment, take my opportunity with both hands and that he will help me all the way.

Rugby15:  Where did your interest in refereeing start?

Rasta: It all started in 2007 when I was at an U19 club game and came off the bench and one of my mates chirped the ref and I confronted him because I thought that the ref was refereeing well. I hung my boots up that day and I spoke to the same ref and got affiliated with the local union.

Rugby15: Who has been your greatest inspiration with regards to refereeing?

Rasta: André Watson and Tappe Henning – André has been a revelation in my life for many reasons, on and off the field he has helped me to be the best that I can be and has changed the way I look at things. He has an incredible rugby brain, exceptional life skills and is a father figure to me as he guides me through thick and thin. He knows how to handle me and knows how to discipline me to get the best out of me. Tappe Henning is also a revelation as he is a brilliant mentor and guide through refereeing and life skills too. He carries an aura of discipline, commitment and hard work. He is an inspiration in many ways and I believe both him and Andre are wonderful role models.

Rugby15: South African supporters have a habit of blaming the referee when their team losses, is this something that plays on your mind ahead of a game?

Rasta: No not at all – people have their own opinions and in our shoes, 50% of the people will think you are a good and accurate referee and the other 50% will think the worst of you. It never plays in my mind as I concentrate on what I have to do and reflect on how well I have done the job.

Rugby15: What is one thing you would like South African supporters to understand when it comes to refereeing?

Rasta: I want people to understand that refereeing is an amazing sport and encourage more and more people to sign up with local unions and get involved. People have a perception that it’s for people that are perfect but it’s not, referees make mistakes every game just as players do and the beauty of it is that you develop holistically as a person in many respects.

Rugby15: First Currie Cup game done and dusted, where to from here?

Rasta: I’m just going to focus on the next game presented, the SA U18 game this weekend and I hope I get other opportunities in 15’s while I concentrate on the 7’s training as the series comes up soon on the 13th of October.

Rugby15:  Favourite team to officiate and why?

Rasta: I really enjoy refereeing all teams as they bring something to the competition- Currie Cup.  I have made a lot of friends all over the country so it’s always good to catch up after a game. In 7’s I also enjoy all the teams as we all reside in the same hotels and I have also made some good friends all over the world.

Rugby15: Most memorable experience in Rugby?

Rasta: In Sevens my most memorable rugby experience will have to be refereeing the Final of the Hong Kong Sevens – Fiji vs. New Zealand as this was my Sevens Final and it was one of my best experiences. Fiji winning 35-28. In 15’s it has to be the Varsity Cup Final earlier this year where Tuks won 29-21.

Rasta: I really enjoy curry, so my girlfriend (Nadia) and I love going to a Curry restaurant.

Rasta: It has to be Stella Artois.

Rasta: It has to be Cape Town as this is a beautiful city, we love going there for holiday and spending quality time together.

Rasta: I enjoy chilled music, at the moment I’m loving Florence the Machine.

Rasta: There are many but the one that stands out for me is JP Petersen.