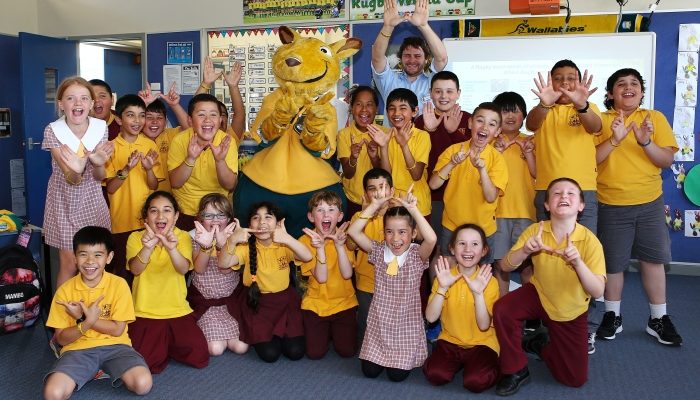 National Rugby Week in 2016 is set to capture the imagination of Australian students with a focus on the National Rugby Sevens Teams as they bid for Olympic glory at Rio 2016.

Kicking off on Monday 25 July, the five days of Rugby education are incorporated into the classroom and on to the field for students and teachers alike to participate.

National Rugby Week is a part of the ARU’s Game On program, which is funded through the Federal Government’s Sporting Schools program.

In 2015 over 126, 000 students at 748 schools took part in the week that is all about exposing students to Rugby, its values and the physical and health benefits playing Rugby can bring.

Every school that joins in NRW will enter the draw to win a signed Qantas Wallabies jersey and two signed Rugby balls. Schools that sign up to the ARU’s Game On program and National Rugby Week will be put into a draw for the opportunity to have an Olympian from the Rugby Sevens teams visit their classroom.

Qantas Australian Men’s Sevens captain, Ed Jenkins: “Rugby Sevens is a fun way to get involved in Rugby and National Rugby Week will give our Aussie kids a great opportunity to see what our sport is about.

“We have a massive challenge ahead of us when we compete in Rio and all the support we get from back home will help drive both Australian sides to want to be their best.”

Qantas Australian Women’s Sevens scrumhalf Charlotte Caslick: “As we continue to build on our preparation for the Olympic Games it’s fantastic to know that thousands of Aussie kids will get their first taste of Rugby at National Rugby Week.

“Rugby at the Olympics is an exciting new chapter for our sport and there will be future Olympic stars that will be getting their first start at Rugby Sevens through National Rugby Week.”