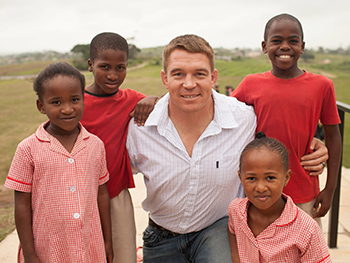 Durban, 22 July 2013: The Lungisisa Indlela Village (LIV Village) is proud to announce that they will play host to Saracens from the UK and Jonsson College Rovers in an exhibition match scheduled to take place on Wednesday, 14th August 2013 on the John Smit Rugby Field, which was funded and officially opened by John in 2012.

Nic Jonsson, CEO of Jonsson’s Overalls has agreed to sponsor R100,000 towards the match, which will be known as the Jonsson LIV Community Cup.

This match serves to highlight and create awareness of the wonderful work that the village does in providing holistic residential care for vulnerable children and placing parentless children into a family environment where they receive unconditional love, spiritual discipleship, care and nurturing. The core vision of the village is to rescue a child, restore a life, raise a leader and release a star.

Founder of LIV Village, Tich Smith confirmed, “This game has been initiated by John Smit and Edward Griffiths (CEO of Saracens) and will have huge significance in the communities as we see first-class rugby taken to a rural area for the first time. Both these gentlemen are adamant that they don’t just want to speak about transformation but they want to ‘do’ transformation.

He added, “I believe that the biggest problem we face in this country today is the disparity between the rich and the poor and it’s time for those of us ‘who have’ to go and share what we have with those who ‘don’t have’. This game has already received an amazing reception from Dr Zweli Mkhize (Premier of KwaZulu-Natal) and the local government of eThekwini.

“The significance of this match could be far-reaching as the elite and wealthy stretch out a hand to the poor, destitute, the widowed and orphaned of this nation. It will also be significant that 8 of the leading schools (Michaelhouse, George Campbell, Maritzburg College, Kearsney, Westville, DHS, Glenwood and Northwood) will play in a 7- a side tournament on the day as a curtain-raiser to the main match. This will also be a huge opportunity to identify the rugby talent in KwaZulu-Natal.”

John Smit, The Sharks CEO, former Saracens player and LIV Ambassador added, “A game involving one of Europe’s best teams being played at LIV Village, which is situated in a rural community against one of the best local club sides, shows the commitment from everyone to not only raise awareness and much needed funding for the children of LIV, but also to showcase rugby in an area that wouldn’t usually have such a privilege.”

Saracens have been supporting LIV Village throughout the 2012/2013 season by wearing the LIV logo on the sleeve of their playing jersey.

Jonsson College Rovers is a team that continues to perform admirably and has produced many great players who have gone on to enjoy international success.

Their club chairman, Abonga Nkwelo stated, “It is a real honour to play against a side like Saracens, who are one of the best side’s in Europe. Although the day will be more than just about rugby, our team are set on giving nothing but their best on the field of play. We are very excited.”

The main match kicks-off at 15:00 and entry is free. There will be loads of entertainment for the whole family.

We encourage the public to come watch some entertaining rugby in a place that continues to teach and inspire us about the true meaning of the human spirit. 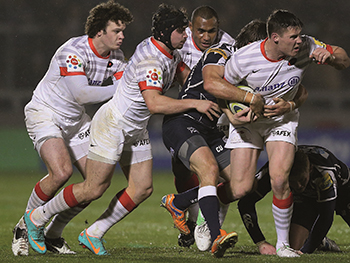