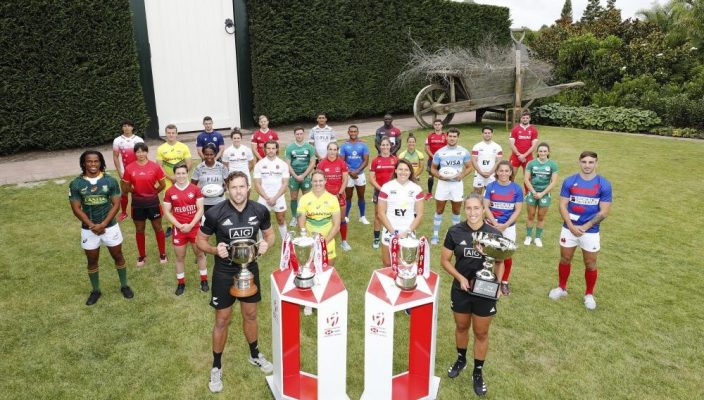 The captains of the 28 participating men’s and women’s teams came together at the iconic Hamilton Gardens today to launch this historic event which will see 12 international women’s teams play their first ever world series event in New Zealand.

This landmark move comes as the women’s HSBC World Rugby Sevens Series expands to eight rounds this season, with Hamilton being one of six that are combined with existing men’s events.

After back-to-back wins in Dubai and Cape Town, the Black Ferns Sevens will be looking to go one further and secure their first world series victory on home soil while their male counterparts will be aiming to replicate their recent victory in South Africa this weekend.

Their captain, Sarah Hirini who makes her return from injury this weekend after missing out in Dubai and Cape Town is excited at the prospect of playing to a home crowd this weekend.

“This weekend is going to be huge. A couple of our girls actually live here in Hamilton so they’re going to have all their family here but we’ve talked a lot about being able to have that home advantage. Travel for us is massive so just having an hour and a half journey to get here has put us in good stead going into this weekend.

“It’s really special to have the men’s and women’s tournaments played together for the first time. It’s amazing to have 28 captains gathered for the photo and everyone can’t wait to get out on the field on the weekend.”

The Black Ferns Sevens will face invitational side China in their opening Pool A game on day one before going on to play Fiji and then England on day two.

The All Blacks Sevens are also looking forward to playing to their home fans this weekend.

“We get to play all around the world, but you only get one home tournament and we’re lucky enough to get our own,” said captain Tim Mikkelson.

“We can take a lot of confidence from the last two tournaments. We’ve been training really hard the last couple of weeks and we’ve got a couple of new boys coming in who will hopefully lift the level again. It would be everything to win this tournament – we’ll have our friends and family in the stands so we really want it to be something special.”

Also drawn in Pool A, New Zealand will play Wales and last season’s runners-up USA on Saturday before their final pool game against Scotland on Sunday.

Last year’s winners and series title holders Fiji have so far failed to secure a spot on the podium this season. Their captain, Meli Derenalagi says his team has learned a lot from Dubai and Cape Town.

“We have learned a lot about our weaknesses but we will try to improve this upcoming weekend,” he said.

“The preparation has gone well for this weekend but we know we really need to go out and deliver now. The supporters and fans we have in Hamilton make us feel like we are playing back at home and we are looking forward to this weekend.”

They will play in Pool D against Argentina, Australia and Samoa.

The action gets underway at the FMG Stadium at 09:30 local time on 25 February when France take on Spain in the women’s competition.

Tickets for Saturday and Sunday are available online at www.sevens.co.nz