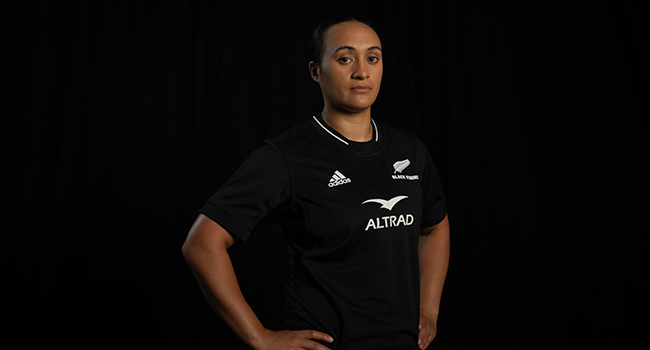 Seven players are in line to make their Black Ferns debut on home soil, with the team to be led by new captain Ruahei Demant (Te Whanau a Apanui, Te Whakatōhea, Ngāti Awa).

Demant’s debut for the Black Ferns in 2018 cemented a resilient return from three serious knee injuries and since then she has gone on to play 15 Tests at first and second five-eighths.

“Lu (Ruahei) has the trust from this group. She is a clear, specific communicator and we see this as a great opportunity to grow her leadership,” said Director of Rugby, Wayne Smith.

Speaking of the debutants, Smith said the coaching group were impressed with what they saw during Sky Super Rugby Aupiki.

“These players really showed up in Aupiki. They are young, eager and really deserve the chance to have a crack”.

Four of the debutants come into the front row, with Bay of Plenty’s Natalie Delamere and Angel Mulu, Canterbury’s Lucy Anderson and Waikato’s Tanya Kalounivale. Youngsters Kaipo Olsen-Baker (19) and Tafito Lafaele (21) join the selected loose forwards while Olympic gold medalist Ruby Tui is named in the Black Ferns for the first time.

Several experienced players including Les Elder, Eloise Blackwell and Renee Wickliffe have missed selection for the Pacific Four Series. Smith confirmed it was important to make sure all players can put their best foot forward when wearing the black jersey.

“These are players that have had a significant impact on the Black Ferns team for a long time. We want them to be in the best possible condition to be selected for Rugby World Cup.”

“We’ve been looking at videos and doing a lot of education around what type of game we want to play. There is potentially a bit of an experimental tinge to it but we know we have some catching up to do and now is the time to do it,” said Smith.

Joanah Ngan-Woo, Luka Connor and Tanya Kalounivale have all recently left behind their day jobs and signed professional contracts for the remainder of 2022.

Black Ferns debutants
Natalie Delamere
Born: 9 November 1996
Position: Hooker
Natalie Delamere made her Farah Palmer Cup debut while in her last year of Rotorua Girls High School and has been a regular feature for either Bay of Plenty or Waikato ever since. Playing most of her early rugby at number 8, Delamare has transitioned to hooker, she was a member of the Matatū Sky Super Rugby Aupiki team before being selected for the NSW Waratahs in the SuperW, where she scored a hattrick in the Final.

Lucy Anderson
Born: 18 May 1991
Position: Prop
A veteran on the Canterbury Farah Palmer Cup team, Lucy Anderson made her debut in 2014 in the midfield. In 2018 she was called into the Black Ferns as injury cover, traveling to France to join the team, but did not make her debut. She has since transitioned to the front row and has been a key pillar of Canterbury’s recent success.

Tanya Kalounivale
Born: 20 January 1999
Position: Prop
Tanya Kalounivale was born and raised in Fiji, moving to New Zealand after completing her schooling. This selection is hoping to be third time lucky for the powerful front rower who was named in the Black Ferns squad in 2020 but did not play due to injury, and also travelled as part of the 2021 Northern Tour squad but did not make her debut.

Angel Mulu
Born: 21 November 1999
Position: Prop
A product of Tauranga Girls College, Angel Mulu made her debut for the Bay of Plenty Volcanix in 2018. A player with a big future, Mulu got herself a special piece of history as the first try scorer in Sky Super Rugby Aupiki, with a five pointer for Chiefs Manawa in the opening match against Matatū.

Tafito Lafaele
Born: 17 February 2001
Position: Loose Forward
A relative newcomer to the game, Tafito Lafaele has made a strong impression as she has developed through the ranks in Auckland. Powerful and athletic, Lafaele went to Botany Downs Secondary College where she starred in athletics, volleyball, basketball, netball and sevens. Last year she played for the Moana Pasifika Sevens team against the Black Ferns and Black Ferns Sevens.

Kaipo Olsen-Baker
Born: 7 May 2002
Position: Loose Forward
Originally hailing from Gisborne, Kaipo Olsen-Baker has been touted for high honours for some time. A school-girl star in both sevens and XVs for Manukura School, Olsen-Baker is explosive, strong over the ball and has great footwork. Returning from injury, she was a stand-out performer in Sky Super Rugby Aupiki for Hurricanes Poua.

Ruby Tui
Born: 13 December 1991
Position: Outside Back
Ruby Tui needs little introduction, but is selected for the Black Ferns for the first time in 2022. One of the world’s leading sevens players, Tui played the XVs game at the start of her career before joining the Ponsonby Fillies in 2020 and going on to be top try scorer in the Farah Palmer Cup for Counties Manukau.