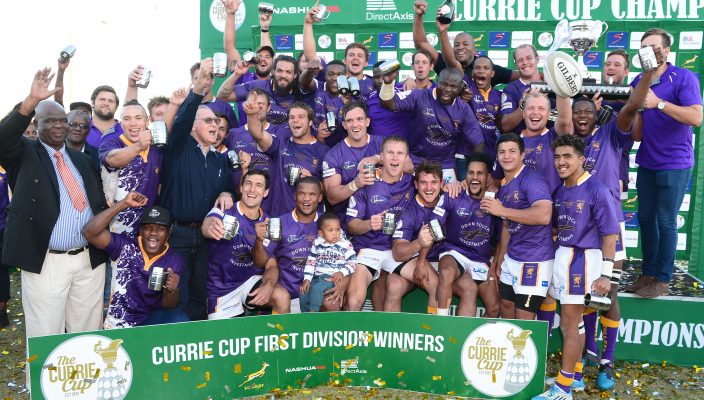 The Down Touch Griffons and their U20 team successfully defended their titles in a thrilling day of action on Friday at the HT Pelatona Projects Stadium in Welkom.

The senior team secured a rewarding 60-36 victory against the Leopards in the Currie Cup First Division Final, while the juniors defeated the Limpopo Blue Bulls 29-22 in the SA Rugby U20 Championship. 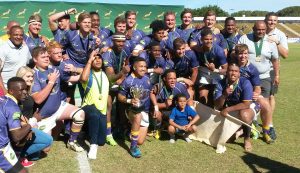 The Down Touch Griffons were in fine form in the first half of the Currie Cup First Division Final – sponsored by Nashua and DirectAxis – as they built up an encouraging 25-12 lead and they built on this after a solid fightback from the Leopards to cruise to victory and secure their second title in a row.

Flyhalf Juan Kotze opened up the scoring in the fourth minute with a penalty goal, which triggered an impressive attacking spree from the hosts.

Down Touch Griffons captain and centre Duan Pretorius scored their first of three first-half tries in the 12th minute as he dodged the defence to force his way over the chalk, while Kotze touched down for the second six minutes later after receiving a well-timed off-load and holding off a defender to hand the team a 15-0 lead.

Winger Tertius Maarman broke away on the left of the field to score the team’s third try in the 22nd minute, which stretched their score to 22 points.

The Leopards, however, fought back and earned the rewards as winger Jimmy Mpailane found space and stepped on the gas to touch down, which was followed minutes later with another by flyhalf Gerhard Nortier, who held off two defenders to close the gap on the scoreboard to 22-12.

Kotze had the final say in the half as he slotted over a penalty goal on the stroke of halftime to nudge his team 25-12 ahead.

Leopards winger Gene Willemse made a strong statement in the opening minutes of the second half as he received the ball in space to score the team’s third try, which reduced their deficit to eight points.

Hooker Dane van der Westhuyzen and replacement forward Gideon Van der Merwe also crossed the tryline for the visiting team as the half progressed thanks to a rolling maul and pick-and-go respectively, which pushed the Leopards into a 31-25 lead.

The Down Touch Griffons, however, finished the match with a bang as replacement back Shirwin Cupido and lock Neil Claassen scored, which they back up with a double by Vincent Maruping and another by Maarman, which pushed them into a 60-31 lead with five minutes to play, which they held onto for the comprehensive victory.

In the SA Rugby U20 Championship Final, Griffons flyhalf Luan James opened up the scoring in the sixth minute with a drop goal and fullback Qamani Kota scored the first try 12 minutes later as he broke through the defence and dashed to the tryline to hand the team a 10-0 lead.

The Limpopo Blue Bulls hit back with a penalty goal, which the hosts cancelled out as James slotted over two more. The visitors, however, finished the half strongly thanks to a well-timed chip-and-chase by scrumhalf Ethan Williams for their first try of the match, which saw them trail 16-10 at halftime.

The opening exchanges of the second half were tight, but the hosts found their rhythm and extended their lead to 29-10 compliments of back-to-back tries within three minutes by winger Allistair Mumba, followed by a drop goal.

The visitors from Polokwane showed their fighting spirit as they added two tries in the dying minutes to trail 29-22, and they threatened to cross the tryline again before the final whistle, but they were shut out by the tenacious defence, which allowed the Griffons to defend their title.

With the Down Touch Griffons senior side having earned the top spot on the Currie Cup First Division log table, they will face Tafel Lager Griquas in Kimberley on Friday in a promotion-relegation match for a place in the Currie Cup Premier Division next season.