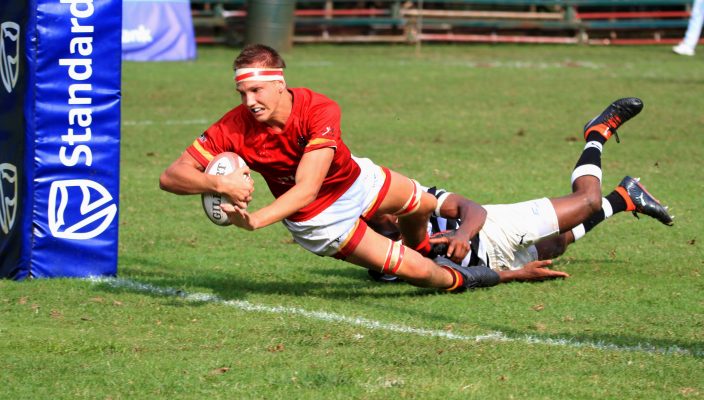 The penultimate festival match, between Selborne College and HTS Drostdy, saw the East London side dominating position for the first 20 minutes.  The Worcester team struggled to get their hands on the ball and, when they did, they were cut down.

Selborne went into an early 10-0 lead following a penalty by Thomas Bursey, followed by a try scored by centre Sibabalwe Xamlashe, converted by Bursey.

A second penalty by Bursey, followed by a strong run by prop Shakeel Naidoo, again converted by Bursey, left Selborne well in control and looking comfortable with a 20-point lead.

Drostdy gradually began winning more ball and with this became far more competitive.  Their first try came five and a half minutes from the break, when flank Heinrich Naude scored following a lineout.  Just two minutes later, Naude scored his second try after some good inter-passing.  This was converted by Shaun Baxter for the deficit to be cut to eight points and a Selborne 20-12 lead at the break.

Bursey increased Selborne’s lead with his third penalty, but it was Drostdy who were looking the stronger.  A yellow card for a high tackle saw Drostdy opting for a lineout rather than three points.  The subsequent rolling maul found hooker Stefan Schwartz in possession to score as they crossed the try-line.

Another penalty conversion by Bursey took Selborne to 26-17 ahead.  Just going into the fourth quarter Drostdy moved down the left and fullback Cohen Jasper scored a good try in the corner.  This was well converted by Baxter to narrow the gap to 24-26.

The game really came alight in the last 10 minutes with both sides striving to score.  Two chances by Drostdy went a-begging.  Then, in the last seconds after setting up a line-out, driving and moving the ball, wing Keane Gelant was found unmarked on the left.  Selborne managed to stop him but from the ruck centre Keane Gelant forced his way over in a mass of bodies, to give Drostdy a 29-26 win in an extremely exciting and excellent game of rugby.

In the fifth match of the final day, unbeaten DHS faced Dale College who had lost both their earlier festival games.  It was the KZN side which dominated the first 10 minutes with a penalty by Shakur la Douce, and then a converted try after Dale had passed back and had to dot down for DHS to have a 5m scrum.

From an ensuing ruck, prop Mthokozisi Gumede found is way over with La Douce adding the extra points, to take a 10-0 lead.

Dale were struggling to keep ball in hand and, with a brisk breeze behind DHS, they kept Dale in their own half.  The Border team did have the occasional visit to the DHS 22m area, but their handling let them down.

In the second quarter it was DHS who scored a further three times.  Lock Setjhaba Mathuse, after inter-passing among the forwards scored first; then it was centre McNeil Jenner who finished a move started by Zethembe Mbonambi after a favourable bounce.  In the final minutes of the half their SA schools loose forward Celimpilo Gumede ran through a tackle to score, this time converted by La Douce, for a 23-0 lead at the break.

Dale improved their play but again lost ground when passes did not go to hand.  With the wind direction across field they did not get much advantage from that.  It was DHS with a kick ahead, a favourable bounce and Gumede was first to dot down.  La Douce converted and DHS had increased their lead to 34-0.

With just over two minutes remaining, DHS had a good passing movement down the field and fullback La Douce was on hand to dive over for their last try and a 39-0 win.

Although this was a game where DHS dominated, Dale did not take their chances and could not hold their passes.