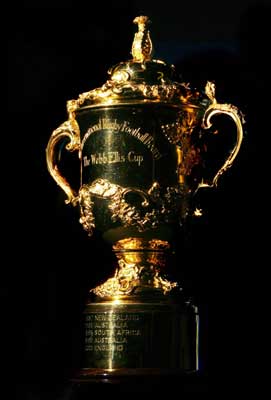 A week on from the 2011 IRB Rugby World Cup quarter-finals, the semis were played this past weekend and the finalists have been decided. The hosts, New Zealand as expected made the last round of the tournament, along with the total outsiders, France.

When the quarter-finalists were decided no one could have possibly imagined France would be there. On www.sportsbet.co.za, France was the second least likely nation after Argentina to make the Final.

One thing we’ve learnt over the ages is that history has this uncanny ability to repeat itself. A prime example of this is in 1812, Napoleon invaded Russia. The Russian winter was Napoleons’ Achilles Heel and he suffered a heavy defeat with unimaginable and uncountable losses. In 1941 Adolf Hitler’s’ Nazi Germany invaded Russia.  Again the Russian winter struck and, again the invaders suffered a crippling defeat.

Having said that, the similarities between the 1987 and 2011 IRB Rugby World Cups are quite staggering. One would be a fool not to keep in mind the lessons learnt from the ’87 World Cup. First and foremost; both tournaments took place in New Zealand.

No team that has lost a pool game has ever won the Final. Australia, Wales and France all lost pool games. In fact, the French became the first side ever to lose two pool games and qualify for the Final. The All Blacks are still the only undefeated team left in the competition.

The exact same four nations made the semi-finals in ’87. The only difference is, France played the Wallabies instead of the Welsh. The Wallabies lost that game in Sydney, Australia 24 – 30. That game will forever be remembered for ‘That try’ the French captain, Serge Blanco scored in the left corner. This specific try is still considered by many to be the greatest World Cup try of all time. * View the try : Serge Blanco sends France to the ’87 IRB World Cup Final.

The following day, the mighty All Blacks crushed the Welsh 49 – 6 in Brisbane, Australia to book themselves the last spot in the ‘87 Final.

Amazingly enough, in ’87 Huw Richards of Wales, received a red in the semi-final. Richards was red-carded, for punching New Zealand’s Gary Whetton. On Saturday, the Welsh skipper Sam Warburton, received his marching order in the 19th minute against the French. This time however, it was not for a punch, it was for a terrible a ‘tip tackle’ on Vincent Clerc.

This coming Friday, we see the Welsh facing the Wallabies for in the 3rd-and-4th place play-off at Eden Park in Auckland. In 87’ this very fixture was played Rotorua, New Zealand. The Welsh won on the day by narrowest of margins, taking the game 22-21.

Sunday is the big one, the Final. In ’87 it was played and the exact same venue as Sunday’s upcoming game. The All Blacks won it in 29 – 9 in ’87, thus becoming the first holders of the converted Webb Ellis Cup. It was the first and last time the All Blacks won the title.

It’s the first time since 1995 that the All Blacks are playing in a Final. Going by what the history books tell us. I think it’s a pretty safe bet to say the All Blacks will be crowned the new World Champions on Sunday. It will see them becoming the third nation to be crowned two-time Champions. The Springboks and the Wallabies are the only other nations to achieve this feat.

If they do win the Final on Sunday it will be one the most well deserved Final victories in the history of the game. With the devastating earthquakes in Christchurch at beginning of the SuperXV this year, being able to overcome all the odds and still host a stunning World Cup the Kiwis thoroughly deserved it.