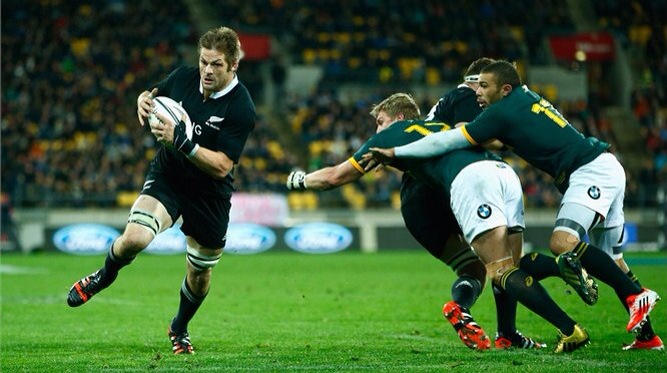 A World Rankings perspective on RWC 2015

Richie McCaw’s 24th Test try proved the difference between the two leading sides in The Rugby Championship, who are now separated by 5.51 rankings points.

The All Blacks could have been supplanted by South Africa as the world’s number one ranked team had the Springboks beaten them by more than 15 points.

But McCaw’s try and two penalties from the boot of Aaron Cruden and one from Beauden Barrett mean the All Blacks’ 58-month tenure at the top remains safe for the time being.

On Thursday, the start of RWC 2015 will be exactly one year away. Nineteen of the 20 participating nations have been decided, with Russia and Uruguay fighting it out over two legs in the next few weeks to fill the last remaining spot.

We take a look at how the pools are shaping up in terms of where the competing countries are in the World Rankings.

Statistically-speaking Pool A is shaping up to be the most competitive of the four pools, with three top 10 ranked nations in hosts England, two-time winners Australia and RWC 2011 semi-finalists Wales set to go head-to-head.

Australia and England are currently ranked third and fourth in the world respectively, although those positions could easily be reversed if Stuart Lancaster’s side enjoys a good home series in November.

Wales are sixth in the world, Fiji – who have the honour of kicking off the tournament with a match against England at Twickenham on 18 September – are 11th, while the last place will be taken up by Uruguay (19th) or Russia (20th).

Two-time Rugby World Cup champions South Africa will begin Pool B as the highest ranked team. The Springboks are currently ranked second in the world – six places above nearest rivals Scotland, who have only ever beaten them once in 12 attempts, 21-17 at Murrayfield in November 2010.

Samoa are one place further back in the rankings and are likely to go toe-to-toe for second place in the pool with the Scots and rapidly improving Japan, now in the top 10 for the first time after a superb run of results, although the USA, ranked 18, will no doubt have something to say about that.

New Zealand will be in the least competitive pool of the tournament if current rankings are applied. The reigning champions and number one ranked team in the world are 11 places better off in the standings than their nearest competitors Argentina.

The Pumas’ poor run of results over the last 18 months has seen them slip to 12th place, their lowest position since the rankings began in 2003, although they have come close to beating both South Africa and Australia in the last month. Tonga are now breathing down Argentina’s necks in 13th, European Nations Cup Division 1A champions Georgia are 15th, and Namibia, who qualified after winning the Africa Cup in July, are ranked 22nd.

This has a familiar feel to it with three of the Six Nations competitors – 2014 champions Ireland, France and Italy – all up against each other.

Ireland, who will be looking to emulate their women’s team and reach a first Rugby World Cup semi-final, at the very least, are the top ranked team at number five, Les Bleus are two places adrift in seventh, while Italy (14th), after a run of nine straight defeats, and Canada (17th) have never been ranked lower. Romania are currently 16th in the world.