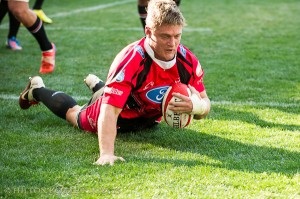 The Eastern Province Kings will go into the second round of league matches in the Absa Currie First Division with a handy six-point lead after seeing off closest rivals the Leopards in a hard-fought battle at the Nelson Mandela Bay Stadium in Port Elizabeth on Friday night.

The Kings finish the first round of seven matches in the expanded, eight-team competition as the only unbeaten side, and they lead the standings with 30 point, ahead of the Leopards, on 24, and the Ford Pumas, who move up to 23 following their comprehensive 67-34 away win over early pace-setters the Griffons in Welkom on Saturday.

In Saturday’s other matches, the SWD Eagles moved up to fourth thanks to an impressive 47-22 win in Kempton Park over the luckless Valke, who are seventh. Defending champions the Regent Boland Kavaliers picked up their second win in a row after losing their opening five matches, squeezing home 39-32 over the bottom-dwelling Border Bulldogs on a day on which the visiting teams made a clean sweep.

The Griffons, after leading the standings early on, slip to fifth after their third defeat, while the Kavaliers climb to sixth.

The EP Kings are well on track to achieve their goal of promotion to the Absa Currie Cup First Division after a hard-fought win over the Leopards gave the men from Port Elizabeth a handy six-point cushion going into the second round.

The match, played in front of a small crowd at the Nelson Mandela Bay Stadium, wasn’t pretty on the eye but the home side got the job done, thanks to the accurate kicking of flyhalf George Whitehead and his replacement, Wesley Dunlop, and the finishing skills of Samoan Paul Perez.

Whitehead slotted two penalties in the first half, cancelled out by opposite number Andrè Pretorius, but ironically it was the yellow-carding of prop Clint Newland in the 44th minute that seemed to sting the Kings in to action. Pretorius made it 9-6 to the Leopards shortly afterwards, but Perez went over midway through the sin-bin period to put EP back in front – and so it stayed.

Fullback Elric van Vuuren had a day to remember on the bone-hard Barnard Stadium in Kempton Park, scoring 22 points to give the SWD Eagles a comprehensive 47-22 win over the Valke.

Van Vuuren scored a try while also kicking four conversions and three penalties as the men from George romped home playing some exciting rugby – with wing Alshaun Bock’s try rounding off a length-of-the-field team effort that will be long remembered.

The Eagles raced into an early 25-3 lead and while the home side struck back through centre Hendrik Meyer, the visitors soon grabbed their bonus-point try via centre Nico Hanekom. The Valke fought back and at one stage were only 10 points adrift, but the Eagles then turned over ball on their own tryline, Van Vuuren surged upfield and handed the ball to Bock, who sprinted home.

The home side had actually led 18-3 early on and 32-21 midway through the second half, only to concede 18 unanswered points as the strong-finishing Kavaliers showed their class by scoring two tries in the final 10 minutes.

Jansen was the man who made all the difference, scoring two tries and kicking five penalties and two conversions, including a penalty in the dying minutes that sealed the victory.

The Ford Pumas overcame a half-time deficit to storm home against the Griffons at the North West Stadium in Welkom, running in 10 tries (including a penalty try) to move up to third in the standings after the first round.

Centre JW Jonker raced over for a hat-trick, while flanker Uzair Cassiem and utility back Carl Bezuidenhout each grabbed a brace.

Griffons skipper Werner Griesel scored twice in a losing cause, and the Griffons must now regroup after losing three matches on the trot and slipping down to fifth in the standings.