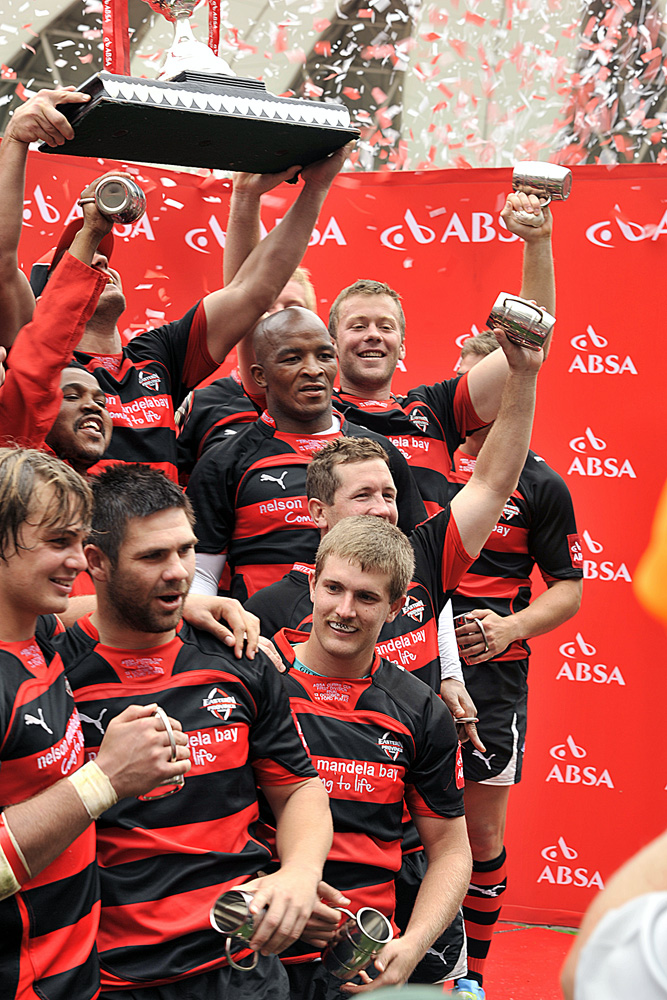 A cheerful Kings side after winning the Absa Currie Cup First Devision in the game between the EP Kings and the Pumas at the Nelson Mandela Bay Stadium in Port Elizabeth. Photo by Dewald Vermaak /Rugby15.

THE Eastern Province Kings are the 2012 Absa Currie Cup First Division champions after a nailbiting 26-25 victory over the Ford Pumas in the final played in Port Elizabeth on Saturday.

The one-point margin of victory at the Nelson Mandela Bay Stadium was a fitting conclusion to an enthralling rivalry between the two sides this season, which produced 30-30 and 26-26 stalemates in their round-robin matches.

The Pumas’ season is now over, but for the Kings their most important matches are still to come, in the form of a home-and-away promotion-relegation clash against the Toyota Free State Cheetahs, who finished last on the Premier Division table. The first of these two matches will be played in Bloemfontein on Friday and the second in Port Elizabeth a week later.

The Kings’ participation in the promotion-relegation series was already assured before the final, after Alan Solomons’ men had topped the First Division log at the conclusion of the round-robin matches.

The EP Kings were crowned champions after narrowly beating the Ford Pumas at the Nelson Mandela Bay Stadium.

The Pumas outscored their opponents four tries to two but were unable to take advantage of a strong first-half performance, while flyhalf George Whitehead’s kicking display for the Kings – 11 points courtesy of a conversion and three penalties – ultimately made all the difference.

The hosts were made to endure a nervy last few minutes when Pumas fullback Coenie van Wyk scored a late converted try but the Kings managed to hold on for the win.

The Pumas dominated the first half and could have held a substantial lead at the break had the normally reliable flyhalf JC Roos not fluffed two penalties and two conversions – misses that would prove crucial in the final outcome.

Roos and Whitehead swopped early penalties before the visitors began the take control of the match.

The Pumas grabbed their first try in the 16th minute when they took the ball through eight phases before eighthman RW Kember muscled his way over from six metres out.

The visitors nabbed their second try seven minutes later when Van Wyk rounded off a sweeping backline move to stretch out and score in the right-hand corner.

The Pumas were full value for their 13-3 lead but the Kings, despite being completely outplayed in the half, rescued something from the first 40 minutes with a try shortly before the break via lock Darron Nell.

Whitehead popped over the conversion as the Kings went to half-time trailing by just three points despite the stats being completely in the Pumas’ favour.

The Pumas had 66 percent possession and 68 percent territory in the first half and had to make just 23 tackles to the 48 made by the Kings.

The Kings made a better start to the second half and they took the lead for the first time, in the 49th minute, thanks to two Whitehead penalties.

The match then became a midfield arm-wrestle with neither team prepared to make a mistake but the Kings finally took a stranglehold on proceedings in the 67th minute when left wing Marcello Sampson showed pace and strength to force his way over in the corner for a converted try.

The Pumas ensured a tense finish when flank Jaco Bouwer broke from a maul five metres from the Kings’ tryline to gallop over for an unconverted try to make it 23-18 with seven minutes left.

But EP replacement flyhalf Wesley Dunlop made sure of the victory with a penalty in the 75th minute that made Van Wyk’s late score merely consolatory.

Top 10 point-scorers for the season: