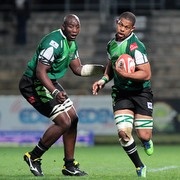 The unbeaten Steval Pumas will host the SWD Eagles in Nelspruit and the EP Kings take on the Leopards in Port Elizabeth next Friday in the Absa Currie Cup First Division semifinals.

These fixtures were confirmed on Friday following the conclusion of the round-robin stages.

In a thrilling round, the Leopards defeated the SWD Eagles 35-24 in George, the Steval Pumas thumped the Valke 67-17 in Kempton Park, the EP Kings beat the Border Bulldogs 38-20 in East London and the Regent Boland Cavaliers and Down Touch Griffons played to a 26-26 draw in Wellington.

While the Pumas’ victory maintained their unbeaten run in the pool stages, the Leopards’ victory allowed them to leap into third place on the log above the SWD Eagles to ensure their semifinal against the EP Kings.

At Outeniqua Park, three tries in the first 23 minutes by the Leopards signalled their intentions early on against the SWD Eagles. They backed this up with another two tries in the last five minutes of the first half to seal their ninth bonus point for tries this season. Unfortunately for the visitors, however, centre Adriaan Engelbrecht had a bad day with the boot, and was unable to convert a single conversion. The hosts, meanwhile, scored two tries by Roy Godfrey and Marshell Boesak to add to an early penalty by Gerrit Smith to remain in the game at 25-17 down at the break.

The Eagles stepped up their defence in the second half and limited the Leopards to only two tries, while they were able to cross the line once. But with seven tries to three, the visitors had done enough to secure the victory.

The Steval Pumas were in fine form from the start against the Valke in Kempton Park as their attack and defence proved dominant. Such was the effectiveness of their performance they worked their way into a 29-7 half time lead and finished the match with a total of 10 tries. The Valke, however, managed to cross the tryline three times, with flank and captain JP Mostert scoring twice. But unfortunately for the hosts the Pumas were in a league of their own.

In East London the Border Bulldogs put up a brave fight in the first half against the EP Kings to trail only 26-20 at the break. The home team came out firing and scored two converted tries in the first eight minutes for an early 14-0 lead. But EP Kings flyhalf George Whitehead hit back with two tries in seven minutes to close the gap. The hosts were reduced to 14 men soon after as hooker Dean Muir was sent to the sin-bin, and the EP Kings took full advantage as they crossed the tryline twice more to seal their bonus point for four tries. Bulldogs fullback Dale Sabbagh, however, kept his team within striking range of the Kings with two penalties, which left them trailing 26-20 at the break.

The second half was much tighter as the teams threw everything at each other. The rub of the green, however, favoured the Kings as the Bulldogs were pinned for penalties, which allowed Kings fullback Scott van Breda to slot over four penalties to seal their 38-20 victory, and an invaluable home semifinal.

In Wellington the Regent Boland Cavaliers staged a comeback from 14-5 down against the Down Touch Griffons thanks to a hat-trick of tries by right wing Brendon April to save themselves from a disappointing end to the season. Both teams scored four tries in what proved to be a tense encounter as they gave everything to finish their season on a high in a clash that was played purely for pride. The three points for the Griffons for the draw with four tries, however, allowed them to hop into sixth place of the log.