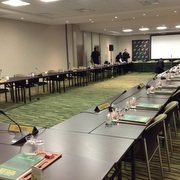 A proposal to expand the Absa Currie Cup Premier Division to eight teams in 2014 was rejected by a Special General Council meeting of South African Rugby Union provinces in Johannesburg on Monday. A second proposal – dependent on the success of the first – that the Lions be entrenched in Vodacom Super Rugby for the next two years therefore fell away.

As a result, the status quo remains and the team that finishes top of the Absa Currie Cup First Division log in 2013 will play the last-placed team in the Premier Division for the chance of promotion to the 2014 Premier Division.