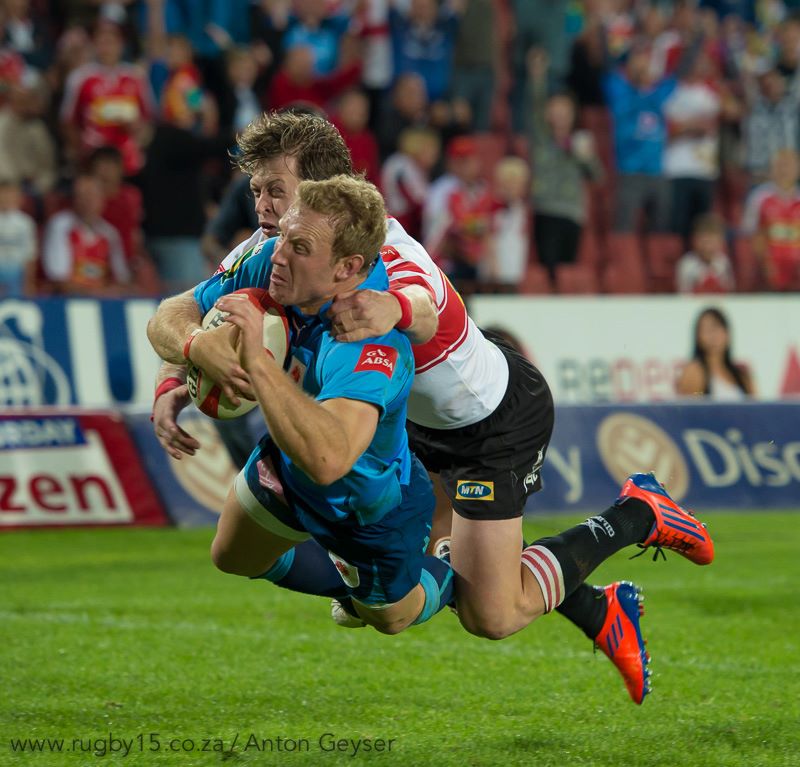 Jano Vermaak diving over for the score against his former team the MTN Golden Lions. Photo b y Anton Geyser /Rugby15.

GWK Griquas’ season is now over after they finished fifth in the final standings, but their disappointment at having lost out on the play-offs will at least be tempered by the fact that they finished the regular season having managed to retain their Premier Division status for 2013.

Not so lucky are the Toyota Free State Cheetahs, who must now play an additional two matches, in the form of a home-and-away promotion-relegation series against the Eastern Province Kings, for the opportunity to remain in the top flight. The first of those matches will be played in Bloemfontein on Friday and the second in Port Elizabeth a week later.

The Sharks made sure of top spot in the final standings with a 42-3 win over Griquas in Durban on Friday – a result which means that John Plumtree’s men will host the final should they overcome the Blue Bulls.

DHL Western Province hung onto third place thanks to a convincing 36-15 victory over the Cheetahs in Cape Town in the weekend’s second match – a result which meant that the Blue Bulls had to win their match, against defending champions the Lions in Johannesburg, to ensure they avoided the wooden spoon.

This they duly accomplished in style with a 50-29 victory to set up a titanic semi-final against the Sharks at Mr Price Kings Park this coming Saturday (kick-off 16:30). The Lions will host WP at Coca-Cola Park in the second semi, which kicks off at 19:00.

The Sharks started the final weekend with a convincing victory over Griquas at Mr Price Kings Park.

The Durbanites just needed to win to make sure of prime position on the log going into the playoff phase, and once they had taken a 10-0 lead after 14 minutes there was seldom any doubt that they would achieve their objective.

The Sharks didn’t need to get the four-try bonus point but they got it anyway, with replacement flanker Lubabalo Mtembu dotting down as the Sharks worked the ball left with 10 minutes to go in a one-sided game.

While the winners never really engaged top gear, they were always significantly better than a well-beaten Griquas side who lacked the intensity they displayed in their home games in Kimberley this season and against the Lions last week.

Griquas actually shaded the possession battle early on but slipped too many tackles, as many as five in the first 14 minutes, and that played a role in the Sharks dominating territory. Patrick Lambie, playing his first full game at flyhalf for quite a while, did everything and perhaps even a little more than could have been expected of him in his first game back after warming the Springbok bench.

He did miss a first-half penalty but he slotted most of his kicks, including the touchline conversion of Mtembu’s try. His distribution was good, his tactical kicking was excellent and while Griquas were well below Test level, he did at least show that he has remembered the essentials of flyhalf play.

It was his little kick through after taking the ball flat following a crash up by JP Pietersen that set up the second try in the 27th minute, with fullback Louis Ludik coming through to grab the ball and score.

Lambie missed that conversion, but it meant the Sharks led 15-3 following a ninth-minute try scored by the impressive young scrumhalf Cobus Reinach, who featured twice in the movement as he drew in Odwa Ndungane before taking the return pass from the wing.

Lwazi Mvovo, on for Ndungane when he was injured in helping set up the first try, scored the third try two minutes from the break to propel his team into a 22-3 halftime lead.

Lambie was the deserved recipient of the man of the match award and seemed to become more assured the longer the game lasted, and he was in the thick of things as the Sharks closed out the game in the second half.

He kicked penalties in the 44th minute and the 50th before the Mtembu try and then a turn-over effort completed by replacement scrumhalf Charl McLeod ensured that there was plenty of light between the teams on the score that shone on the Kings Park scoreboard at the final hooter.

The phrase “being sent packing” was given new meaning by DHL Western Province at Newlands on Saturday night as they sent the Toyota Free State Cheetahs into promotion-relegation mode.

WP, with seven Springboks back, were always going to be favoured to win, and the result was never in doubt as they romped home.

There were times in the first half that the hosts weren’t direct enough and that was the reason why they looked like they were making heavy weather of the task at that stage.

Not that they were ever threatened in the match, with flyhalf Demetri Catrakilis putting them into a 3-0 lead that they would never relinquish with a third-minute penalty, before returning captain Jean de Villiers scored a highly popular try in the corner in the ninth to make it 8-0.

It was still a close game as the half hour mark neared, but then WP surprised the Cheetahs by taking a quick tap from a penalty awarded almost in front of the posts, and big Andries Bekker went over for a try that the TMO awarded after lengthy deliberation.

And three minutes before the break WP pretty much wrapped up their third-place finish when, from an attacking lineout, a driving maul deposited Deon Fourie over the line.

Fourie was of course the captain before De Villiers returned and he is enjoying a great season, so it was fitting that he should complete a great field day for himself by breaking a few tackles up the middle before going in for the fourth try.

The Boks did make their mark, and none more so than the second row, with Eben Etzebeth winning the official man of the match award and eighthman Duane Vermeulen celebrating his return to the Cape side with the fifth try, going over near the posts with around a quarter of the match left to give his team a 36-3 lead.

At that stage a score beyond the 50 mark looked distinctly possible but the Cheetahs came back well in the last quarter to score consolation tries through Francois Uys and Philip Snyman that gave the scoreboard some respectability.

The Vodacom Blue Bulls produced a scintillating display of controlled rugby as they powered to victory over the MTN Golden Lions at Coca-Cola Park.

On a night where winning was the only option, the Blue Bulls had to overcome an early setback and went down 13-0 before clawing their way back.

It was a remarkable difference that the Boks made to the Blue Bulls, with Jacques Potgieter, Flip van der Merwe, Mornè Steyn and Zane Kirchner all looking top class in the game.

Yet it didn’t start off that well as the Bulls struggled in the opening exchanges, and had to watch as they were under pressure from the word go with little ball to speak of in the opening 20 minutes.

In that time, Butch James slotted two penalties, and a brilliant bit of counter-attacking led to Michael Rhodes’s try, giving the Lions an early 13-3 lead.

But then Steyn started to take control of the game, and on the back of a pack that was slowly gaining the ascendancy, he clawed the Bulls back into the game.

First a stunning drop goal reminded the crowd that Steyn had rediscovered his confidence, and even though the Lions answered with a penalty, Steyn drilled two more of his own back to bring the Bulls within four points.

Then, as halftime started approaching, Jacques Potgieter burst through a lovely gap and sprinted 50 metres, being stopped just short of the tryline but not before unloading to Bjorn Basson to crash over for the try and take the lead.

Another Steyn penalty made it 22-16 at the break, but that lead was cut almost immediately as Butch James slotted two penalties early in the second half to bring the scores level.

With the Bulls needing the win to secure their semi-final place, the match was on a knife edge, and it was the Lions who blinked first when Kirchner tapped back an up-and-under into the hands of Arno Botha, who surged forward before offloading to Jano Vermaak for the try.

The Lions fought back, and it wasn’t long before Anthony Volmink spotted a gap behind the ruck and burst through to level the scores again.

As the game reached the final quarter, the Blue Bulls’ experience and pedigree showed through, and they simply moved away from their opposition, and while a first lineout drive was denied, the second proved a lot more deadly as Botha claimed the score.

Then the wheels really came off for the Lions, as first a quick throw went horribly wrong and captain Dewald Potgieter pounced to grab the loose ball and score. Then, in their desperation to run, Butch James slapped back a ball into no-man’s land, with Akona Ndungane on hand to scoop up the loose ball and so drive the final nail into the coffin.