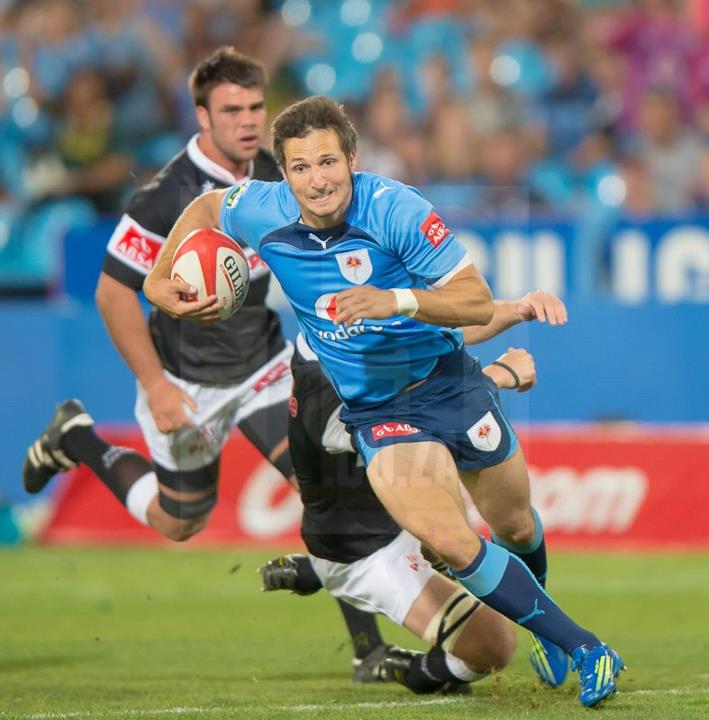 THE deadly boot of flyhalf Elton Jantjies ensured that defending champions the MTN Golden Lions climbed back to the top of the Absa Currie Cup Premier Division standings, while there were also wins for the Toyota Free State Cheetahs and Vodacom Blue Bulls in Round three of the country’s premier domestic competition.

The Lions edged out DHL Western Province 26-23 at Coca-Cola Park in Johannesburg on Saturday for their second win in three outings. This result puts the Gauteng-based side ahead of the Sharks on points difference. WP, meanwhile, slumped to a second defeat and now lie in an unfamiliar fifth place on the log, with six points.

The Cheetahs came away from GWK Park in Kimberley with a full haul of five log points following their 29-16 win over hosts GWK Griquas, leaving the men from Bloemfontein tied with the Lions and Sharks on nine log points, but third on points difference. Griquas, in contrast, find themselves rooted at the bottom of the table after a third consecutive defeat.

And in Saturday’s other match, the Sharks were no match for Vodacom Blue Bulls flyhalf Louis Fouchè’s boot, the pivot kicking 27 points in a 42-31 victory at Loftus Versfeld to move the Pretoria-based side to fourth on the table – just one point adrift of the leaders.

The Toyota Free State Cheetahs turned in a strong second-half performance to down a spirited GWK Griquas at GWK Park in Kimberley on Saturday. The Cheetahs, after being under the cosh for much of the first half, ran in three tries after the break as the hosts slipped to their third consecutive defeat.

Griquas enjoyed almost total domination during the first quarter and were only prevented from scoring by a strong cross-wind, which made goal kicking particularly difficult, some tenacious defending from the Cheetahs and handling errors at crucial moments.

Griquas held a 10-3 lead thanks to tries from Ligtoring Landman and Rocco Jansen, but the Cheetahs were stung into action and, with the half-time hooter having already sounded, the visitors opted to take a tap penalty five metres from the host’s tryline which resulted in flanker Pieter Labuschagne burrowing his way over for a converted try to level the scores.

The home team had enjoyed 71 percent possession in the first half and they opened the scoring in the second when flyhalf Francois Brummer popped over a close-range penalty, but another bullocking run from Labuschagne eventually led to a try for his fellow Cheetahs loose forward Frans Viljoen.

The visitors grabbed another try four minutes later after they took the ball through 10 phases before a sniping break from Sarel Pretorius saw the scrumhalf pop a scoring pass to left wing Raymond Rhule as the Cheetahs took a 22-13 lead after 56 minutes.

Brummer narrowed the gap with a 63rd minute penalty but the Cheetahs scored their bonus-point try soon after when Pretorius slid over from close range.

Elton Jantjies gave a positive response to the question of whether there is still some fight in the MTN Golden Lions after losing their Vodacom Super Rugby status, as he spearheaded them to a deserved win over DHL Western Province at Coca-Cola Park on Saturday.

Not for the first time this season, the pinpoint goalkicking of the flyhalf was the difference between the teams, with the visitors for once finishing on the right side of the battle for tries but losing out because of indiscipline that Jantjies feasted on to give his team the winning edge.

Jantjies kicked seven penalties to go with flank Josh Strauss’s first-half try in a match which drew to an exciting conclusion after prop Brok Harris went over late in the game.

It was an exciting end to a game which started off with WP dominating and playing some quite compelling early rugby, underlined by the statistics after 10 minutes which showed that the Lions had been forced to make nearly 30 tackles.

A patient build-up which went through more than 15 phases saw Gerhard van den Heever go over after eight minutes, and when some more impressive rugby led to a penalty in front of the posts that Demetri Catrakilis kicked to make it 10-0, it looked as though WP might be set to break their recent losing trend at Coca-Cola Park in the domestic competition.

But once the Lions started to get their hands on the ball they started to settle and show some impressive control, and in the last part of the first half their superiority was shown by the 11 unanswered points they scored through two Jantjies penalties and Josh Strauss’s try.

A Jantjies penalty three minutes from the end of the first half gave the hosts an 11-10 lead and they were never headed again in the match.

The Vodacom Blue Bulls bounced back from one of their toughest weeks yet to score a stunning and unexpected victory over the Sharks at Loftus Versfeld, winning 42-31.

The Sharks arrived at Loftus Versfeld unbeaten, fresh from victories over the Lions and WP against a side who had struggled to whole week to simply have a practice session.

After their defeat in Bloemfontein, the Bulls returned to find the bulk of their side under the weather, down with flu and only on Thursday managed to run through their moves after a week from hell in the run-up to this fixture.

But with a passionate performance, and riding on the back of a superb all-round performance by flyhalf Louis Fouchè, the home side managed to confound the odds and pull off the victory with a young team full of talent.

Fouchè, the 22 year old understudy to Bok flyhalf Morne Steyn put in such a dominant performance that it made one wonder why the Bulls never employed him more in the Super Rugby tournament.

From his long-range drop goals – one sailed in from more than 50 metres out – to his flawless kicking and effortless distribution game, Fouchè contributed 27 points on a night where his side really needed them.

In the first half, where they were battering away without too much reward, it was Fouchè’s boot that nudged them ahead every time. Even when the Sharks went into the break 14-12 ahead, the Bulls returned with a monster Fouchè drop goal to retake the lead thanks to the Rustenburg born and bred player’s boot.

But the Blue Bulls side powered on in the second half, especially when they were expected to fall off the pace because of the flu, and ripped the heart out of the Sharks defence with three second half tries to secure the victory.