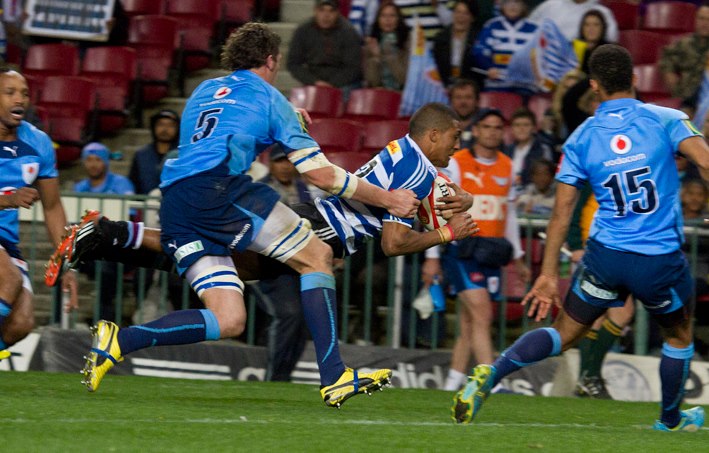 The Sharks broke away from the chasing pack on a dramatic weekend of Absa Currie Cup Premier Division action, while there were also memorable wins for DHL Western Province and GWK Griquas in Round 4 of the six-team competition.

The Sharks came from behind to beat the Toyota Free State Cheetahs 34-32 in Durban after trailing 21-6 at half-time – a remarkable rearguard action which takes coach John Plumtree’s troops three points clear at the top of the table.

WP moved into second in the weekend’s final match when they hammered the Vodacom Blue Bulls 42-6 in Cape Town in a match in which the home side scored five tries without reply.

And Griquas kicked off the weekend’s action in style on Friday night when they came from behind to beat defending champions the MTN Golden Lions 42-32 in Johannesburg.

A late try from Jean Stemmet sealed an entertaining first victory in this year’s competition for GWK Griquas, as they downed defending champions the MTN Golden Lions, 42-32 at Coca-Cola Park on Friday night.

Stemmet crossed the line in the 77th minute to seal a famous victory for Pote Human’s side and finally give themselves points for a win in this year’s competition.

It isn’t surprising that Griquas started with so much passion – Human had warned that this was a watershed moment in their campaign and only if they won would they consider themselves able to compete in this level of competition.

And what a passionate performance it was. Buoyed by their own plethora of ball, and given some poor defence by the Lions at times, Griquas took their chances when it mattered to take the lead in the first half and never looked back.

In the end they outscored the Lions five tries to four, stopped a late comeback and ensured a full-house of points from an away fixture where away victories are very valuable indeed.

Centre Meyer Bosman completed an impressive Sharks comeback by scoring the try and conversion that secured his team a narrow but ultimately deserved win over the Cheetahs at Mr Price Kings Park on Saturday evening.

The Sharks had trailed for most of the game and looked well out of it at half-time after conceding two soft tries in quick succession late in the half. But although they gave away more soft points in the second, they protected their possession far better and scored the four tries that enabled them to take full points from the game.

It was in the balance in the last 10 minutes, and when the Cheetahs were on the attack between the 70th and 75th minutes and they led 32-27, it looked as though the Bloemfontein team might score an upset win.

While the Sharks had spent most of the second half on attack, they still gave away soft points, and Cheetahs flyhalf Sias Ebersohn might well have been the man of the match had his team won for his two well taken drop goals and the brilliantly directed kick that put wing Nico Scheepers in for a try that kept the Cheetahs ahead just when the Sharks looked well back in it.

But the Sharks have impressive resolve these days, and they don’t give up easily. A brace of tries from Odwa Ndungane to follow an early second-half try in the corner from Riaan Viljoen cut what at one stage had been a 16 point deficit to just five. And when centre Paul Jordaan scythed through the middle with five minutes to go it created just the opportunity the Sharks needed.

The Kings Park faithful would have had their hearts in their mouths as in a few instances it looked as though the Sharks might butcher their big advantage in numbers as they built up, but eventually Bosman was put over for the try that drew the scores level.

The former Cheetah then capped a fine all-round performance – his goalkicking was also spot on all game – by kicking the conversion that clinched it with just over four minutes left on the clock.

DHL Western Province produced a passionate display of running rugby to demolish the Vodacom Blue Bulls at Newlands on Saturday.

In a game which was incredibly one-sided and hardly the showdown that many were waiting to see, Province capitalised on several unforced errors and produced some scintillating play with a plethora of ball to score five tries to none and simply beat their opposition into submission.

On a night where it was supposed to be a massive battle, there was simply only one team on the park.

After Louis Fouchè missed an opening penalty for the visitors, the home side swooped into a 10-point lead thanks to a penalty by Demitri Catrikilis and Nic Groom’s outstretched hand from close distance.

Fouchè managed to bring the Bulls six points through penalties, but it was the last the visitors were to see the scoreboard ticking over on their side as Province stamped their authority on the game and simply took control.

For the Bulls, they made several unforced errors, kicked away some good ball and simply didn’t have the penetration thanks to some superb Province defence. On top of that, their forwards were butchered by the Province pack, as the Bulls simply had no answer to the onslaught they faced.

The scoreline moved further away when the Province pack went for the corner, and drove the ball over, with captain Deon Fourie claiming the score after pushing their way through the Bulls’ brittle defence.