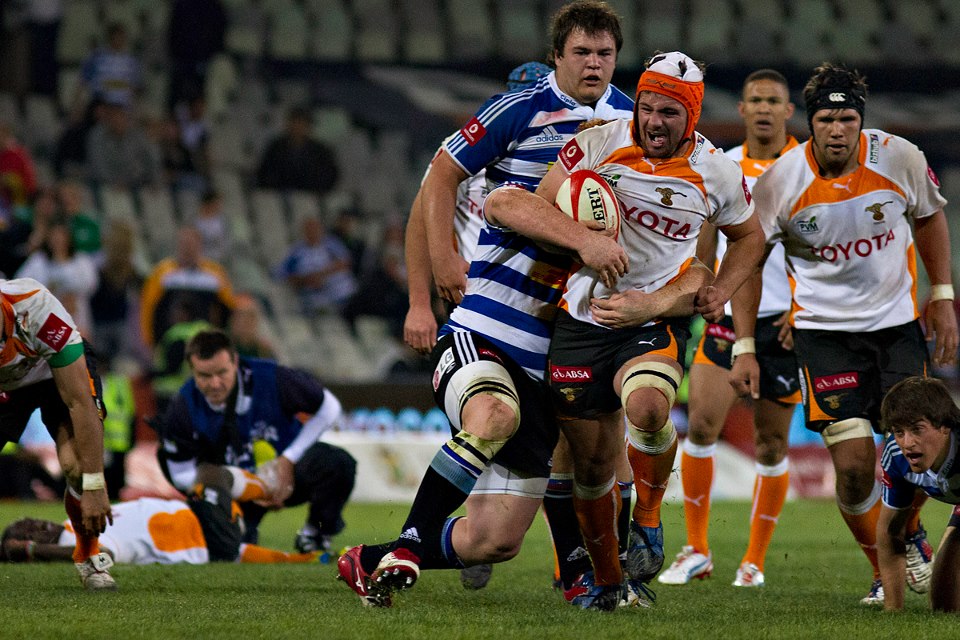 Heinrich Brussow played a big game against DHL Western Province, but it was not enough to prevent Western Province from moving to the top of the log. Photo by Jako Pienaar .

DHL Western Province moved to top of the Absa Currie Cup Premier Division standings at the halfway stage of the six-team competition after a come-from-behind 29-22 win over the Toyota Free State Cheetahs in Bloemfontein on Saturday enabled the Cape side to leapfrog the Sharks into first place.

The Sharks stumbled against GWK Griquas, going down 22-15 in Kimberley on Saturday – a result which sees the KZN side tied with WP and the MTN Golden Lions on log points but drop to third on points difference. The men from Kimberley, meanwhile, climb off the foot of the table and into fifth place thanks to their second win on the trot.

And in Saturday’s other match, defending champions the Lions pulled off a 32-23 away win over the Vodacom Blue Bulls to move to second place on the log, with only points difference separating them and WP.

The Blue Bulls, meanwhile, find themselves in the totally unfamiliar position of propping up the table after a third defeat in five matches, two points adrift of Griquas.

GWK Griquas are starting to displace the Cheetahs as the Sharks’ hoodoo team, with the hosts putting up another spirited display at GWK Park to derail the Absa Currie Cup log leaders.

Griquas deserve credit for the way they hung on as the game, courtesy of the Sharks’ patience with ball in hand and a series of penalties awarded by referee Lesego Legoete, extended four minutes beyond the hooter, with the visitors asserting massive pressure in their quest for an equalising converted try.

But in the end, the sustained period of attacking broke down as the ball was spilled forward in a breakdown just metres from the left corner flag and Griquas celebrated another famous victory.

It was the second consecutive week where Griquas have shocked a more highly-rated team – the result follows on from their good away win over champions the Lions in Johannesburg.

The win enabled Griquas to lift themselves off the bottom of the log, though the Blue Bulls have a chance to push ahead of them again in the later game at Loftus.

The fact that the bottom-of-the-log team beat the team at the top probably says something positive about how tough the strength-versus-strength competition has become, with no team being able to afford taking the foot off the gas.

Not that the Sharks underestimated Griquas. Their coach John Plumtree spoke last week about the need to break what has become a losing sequence at the diamond city, and it was not as if the Sharks started without strong intent.

It was just that they were up against a side that was determined to put them out of their stride by putting in hard tackles and getting in between them on the hard field, and they succeeded in disrupting the Sharks’ usual free-flowing game.

The MTN Golden Lions produced a scintillating display of attacking rugby to move back to the top of the Absa Currie Cup log with a win over the Vodacom Blue Bulls at Loftus Versfeld.

The defending champs looked way too classy on attack for the home side, winning the Jukskei derby with ease and collecting all five points on offer to remind the rest of the competition they won’t be giving up their Currie Cup title just yet.

Led by their talisman Elton Jantjies and with some telling blows in the backline from man of the match Lionel Mapoe, the Lions utilised the width of the field and exploited some poor tackling by the Bulls to ensure a good victory.

The same cannot be said for the Blue Bulls, who, although they were better than their 40-point drubbing at Newlands last weekend, were never good enough to get the victory they so desperately need to save face, and were outplayed in almost every facet on the night.

The Bulls moved to the bottom of the Currie Cup log with the loss, as Griquas leapfrogged them with their victory over the Sharks, meaning the pressure will be on for coach Pine Pienaar in a union used to much better results.

But the night belonged to the Lions, who deserved their victory over the old foe. The Bulls will, however, be kicking themselves, as their flyhalf Louis Fouchè left 13 points on the table with missed kicks.

Marcel Brache was the star of a 29-22 win over the Cheetahs at the Free State Stadium that propelled Western Province to the top of the Absa Currie Cup log with half the league phase of the domestic competition completed.

WP laid down a marker for their new attacking game against the Blue Bulls in Cape Town seven days earlier, but with the Cheetahs winning more ball than the Bulls did, Province were this time subjected to a proper test of whether their new intent might mean sacrificing something from their usually impeccable defensive game.

On the evidence of this match, they have nothing to worry about. While WP moved the ball impressively through the tackle and Nic Groom underlined why coach Allister Coetzee has been comparing him to a young Ricky Januarie by sniping around the fringes, the defence was rock solid.

Perhaps the only blemish was when Davon Raubenheimer was allowed to slip through on the way to creating the Cheetahs’ only try.

The hard-running Cheetahs certainly had enough ball to play with during the middle stages of the game, and again during an impressive sustained multi-phased attack after the hooter that lasted nearly four minutes. But the WP defence didn’t flinch.

It is however inside centre Brache who has been the real breath of fresh air in the new-look WP team.

His passing through the tackle, his decision-making, and his penchant for creating space and opportunities for the players around him, has been becoming more influential as the season has progressed – and in this match, it was impossible to ignore.

But it was Brache’s steal down the wing to grab an excellent Demetri Catrakilis cross-kick and go over to score near the posts that was ultimately the difference between two well-matched teams who provided a great advertisement for the domestic competition.