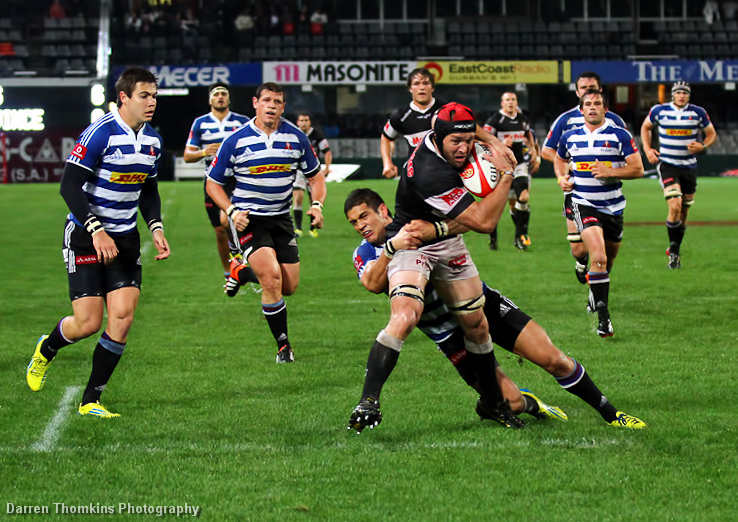 Defending champions the MTN Golden Lions moved back to the top of the Absa Currie Cup Premier Division log on a weekend of high-scoring action, which also included handsome and significant victories for GWK Griquas and the Sharks.

The Lions came away from Bloemfontein with a full haul of five points thanks to a 38-23 victory over the Free State Cheetahs, with flyhalf Elton Jantjies kicking 18 points. The Cheetahs slip to fifth following their fourth loss of the season.

GWK Griquas moved into fourth spot thanks to a 49-34 win over the Vodacom Blue Bulls in Kimberley, their third consecutive win in this year’s competition. For the Blue Bulls, their fourth loss means they stay rooted to the bottom of the six-team log, with only nine points from their six matches.

And in the weekend’s final match, the Sharks moved to 20 points – tied with the Lions but with an inferiors points difference – thanks to a 43-27 win in Durban over DHL Western Province, who slip to third.

The Sharks extended their dominance of their arch-rivals from Cape Town in big competitions as they made the better of their opportunities in a wet weather game to score a solid win over Western Province at a soaked Mr Price Kings Park.

WP’s indiscipline contributed to a farcical finish, with the Sharks playing against just 12 men as they hunted down the fourth try that clinched them the bonus point that enabled them to draw level with the Golden Lions at the top of the log after six matches.

Perhaps it was the frustration of making a habit of coming second to the Sharks – this was their fourth consecutive defeat – that got the better of WP, but while Wilhelm van Sluys could be excused for the yellow card as the Sharks milked his late charge six minutes from time, there was no excuse for the punches that earned red cards for Jebb Sinclair and Tyrone Holmes in the second half.

The five Province forwards struggled to contain an eight-man Sharks pack through a series of defensive scrums that finally resulted in referee Lourens van der Merwe awarding a penalty try to the Sharks. In the conditions it was quite a feat for the Sharks to score four tries, but then the difference in numbers in the last quarter, which was when the Sharks really took control, was a marked one.

The final scoreline never told the full story of a match which, until the events of the last quarter, delivered surprising quality for the conditions. It was a night better suited to ducks or water-polo, with the torrential rain that had fallen on Durban for two days turning the Kings Park playing surface into something that wasn’t far short of being reminiscent of the famous World Cup semifinal between the Springboks and France in 1995.

The MTN Golden Lions regained first place on the log as they put away the Toyota Free State Cheetahs at the Free State Stadium.

The Cheetahs weathered an early storm from the Lions to actually lead 16-13 after half an hour, but the Lions scored two tries in three minutes either side of half time to give the Gautengers a 27-16 lead and thereafter there was nothing that could rescue the Free Staters from a fourth defeat in six matches.

Flyhalf Elton Jantjies instituted some early control for the Lions as his short kick-off caught the Cheetahs napping, was claimed by flank Willie Britz and led to a penalty which Jantjies kicked, followed by another penalty in the sixth minute.

The one area where the Lions did struggle was at the breakdown and referee Sindile Mayende set the tone with an early call against fetcher Cobus Grobbelaar, allowing Cheetahs wing Nico Scheepers to kick the first of three penalties.

The Cheetahs had a much bigger problem, however, and that was their insistence on trying to run their surfeit of possession in their own territory and the mistakes that came as they tried to run under pressure was what eventually brought them to their knees.

The Cheetahs had barely settled down for the second half when centre Lionel Mapoe, another of the Lions’ outstanding players, stood up the defence with wonderful footwork and laid a try on a plate for wing Deon Helberg, a blow from which the home side could not fully recover.

GWK Griquas won an 83-point thriller to down the Vodacom Blue Bulls at GWK Park and reignite their hopes of a semi-final spot this season.

With the victory, they moved further ahead of the Bulls, who now are in dire straits following a fourth loss. While the Bulls arrived full of confidence, a wave of emotion settled on the stadium as the team bonded together for a moment of silence for teammate Jannie Boshoff, who withdrew from the side as his father had died in a plane crash earlier in the week.

The emotion of the occasion was clear and the home side were more than up for the match, taking just 40 seconds to score their first try and running out to a 25-0 lead in as many minutes before the Bulls had time to blink.

On a weekend where the Bulls made it clear they simply had to win, the loss will hit the men from Pretoria hard and will place even more pressure on their coach Pine Pienaar with just four games left – against the Cheetahs, WP, Sharks and the Lions – before the season ends.

While the Bulls fought back to come within a whisker of the lead, their defence once again let them down on so many occasions that they were never going to win the game.

On the other hand, credit must go to Griquas coach Pote Human who has now recorded wins over the Lions, Sharks and Bulls in consecutive weeks, and certainly has shown the team can play with the best. The turnaround is equally remarkable if you think Griquas lost their opening three games and were in danger of being left behind while the Bulls won their opening two games.