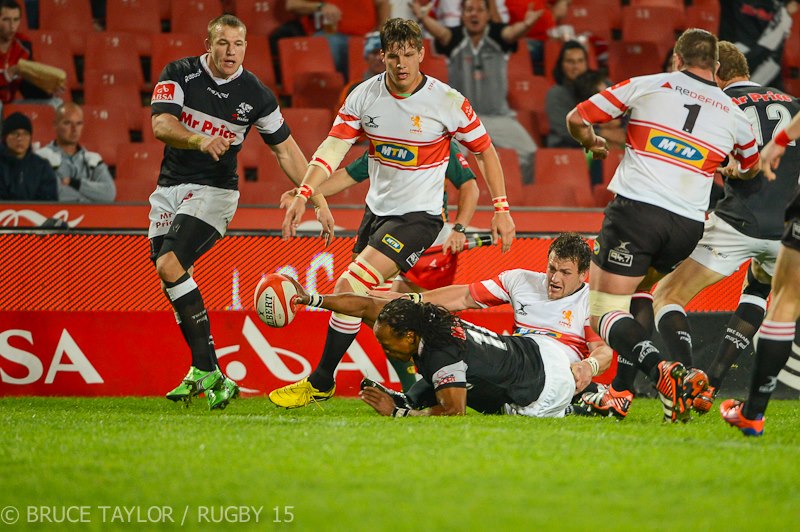 Odwa Ndungane going over for a try against the MTN Golden Lions in Johannesburg. Photo by Bruce Taylor /Rugby15.

DEFENDING champions the MTN Golden Lions opened up a three-point gap at the top of the Absa Currie Cup Premier Division log with three round to play, following a come-from-behind 28-22 win over the Sharks in Johannesburg in a repeat result of last year’s final between the two sides.

DHL Western Province moved into third place, one point behind the Sharks and four adrift of the Lions, after they halted GWK Griquas’ winning streak with a 45-21 win over the men from Kimberley in the weekend’s first match, at Newlands in Cape Town.

The result leaves Griquas in fourth place on 15 points, but breathing down their necks are the resurgent Vodacom Blue Bulls, who climbed off the foot of the table thanks to a 34-30 win over the Toyota Free State Cheetahs at Loftus Versfeld in Pretoria.

The Blue Bulls now occupy fifth spot, two points behind Griquas and one ahead of the Cheetahs, who cannot afford to lose any further matches over the coming weeks if they are to avoid a season-ending promotion-relegation match against the Absa Currie Cup First Division champions.

DHL Western Province regained the momentum they lost in Durban last week by scoring an emphatic win over GWK Griquas at Newlands.

It was the second successive match at Newlands where WP picked up a four-try bonus point, something they managed for the first time in the season in their last game against the Blue Bulls three weeks ago.

They picked up the bonus point in this game before half-time, with skipper Deon Fourie notching the fourth off a driving maul from a lineout one minute before the break.

WP led 31-7 at half-time, and never had their lead threatened once Gerhard van den Heever had scored the first of two intercept tries for the home team that were scored in the first half.

In that sense Griquas were reminded that there are still many occasions in rugby where it doesn’t pay to be the team that enjoys most of the possession.

The visitors maintained the high tempo, busy approach that has seen them slay three giants in successive weeks, and they certainly had enough ball to make an impression during the first half. The only problem was that by the end of that opening 40 minutes it was Western Province who had reversed the trend of Griquas’ game against Bulls last week.

It wasn’t just rugby suicide though that presented WP with points, for the second intercept try, which was scored by centre Marcel Brache, was the product of excellent pressure from the hosts, with Scarra Ntubeni pulling off a strong tackle on Griquas fullback Willie le Roux that forced the poor pass that Brache capitalised on.

Hooker Ntubeni was in fact the unsung hero of the WP effort, and it was fitting that he should be up to grab a ball that bounced following a high kick halfway through the second half to score a highly popular try in the corner. It was WP’s first try after half-time, but their fifth in all, and by then Griquas were well out of the contest.

The Vodacom Blue Bulls didn’t make it look pretty, but did finally return to winning ways as they survived a late comeback to beat the Toyota Cheetahs at Loftus Versfeld.

In a game of desperation which neither side could afford to lose, the Blue Bulls built up a good first-half lead, but were desperate to survive at the death as their opposition came hard back at them and almost snatched a victory.

The win – the first in four games for the Blue Bulls – means they move off the bottom of the log, and at least for now get some breathing space. But while they are only two points behind GWK Griquas and a semi-final spot, they are also only one point ahead of the Cheetahs with just three games left in this year’s competition.

While the game was entertaining, it was also a reminder of how desperation can feed a team and how both sides are missing a dollop of self-confidence in their campaigns thus far.

The scoring may have been dominated by the two kickers, with Nico Scheepers’ 20 points shading Louis Fouchè’s 19, but this was hardly a game when the boot was overly dominant.

Both sides tried to play an expansive game, but things changed for the Cheetahs when their bench came on, and in particular when Sias Ebersohn replaced an out-of-sorts Tewis de Bruyn at flyhalf. Whatever the reasons for De Bruyn’s move to flyhalf, it certainly wasn’t an experiment that worked.

Still, the Bulls were dominant in the opening 45 minutes and were good value on the scoreboard, with a solitary first-half try – thanks to a break by Arno Botha and a speedy finish by Sampie Mastriet – giving the home side a decent lead.

Of course, Fouchè’s big boot helped, and thanks to some massive kicks the Bulls led deservedly 17-9 at half time thanks to the pressure they exerted on the Cheetahs, particularly up front.

After the break the Bulls extended their lead when Jano Vermaak broke from the base of the ruck and Franco Mostert managed to burrow his way over for the try. Both Vermaak and Jacques Potgieter may have been bit players at the Boks of late, but they certainly made a massive impact in the young Bulls team.

The most surprising of which was the exceptional form of young Morne Mellett, who had missed a large chunk of the season with injury, but grabbed his chance to turn in a performance that was filled with passion and determination.

After the Mostert try, the Cheetahs changed tack and as they have done so many times before, started their comeback through some enterprising play, but they fell just short of what would have been a famous rearguard action.

Two tries in the space of a few minutes turned the game on its head and clinched the Lions a hard fought 28-22 victory over the Sharks at Coca-Cola Park.

The Lions have enjoyed a stranglehold over the Sharks in Johannesburg in the past two seasons, but for much of the game it looked set to be broken, with the Sharks being full value for their 16-6 lead at halftime.

Up to that point the Sharks had been the dominant team, enjoying 58% of the possession as well as a similar advantage in the territory battle. The Lions had defended well, and had kept the Sharks at bay to keep it at 6-all to just beyond the half hour mark.

That was when the brilliant Keegan Daniel cut through the middle of the Lions’ defence from a move that had been started deep in his own half by the equally impressive fullback Louis Ludik before putting Odwa Ndungane in on the right.

Meyer Bosman missed the conversion but the Sharks made up for it by scoring what should have been a try of huge psychological significance after the hooter.

The ascendancy that the Sharks had enjoyed in most aspects of the game in the first half changed around though after halftime, with the hard-working Lions scrum laying the foundation for a strong fightback.

Man of the match Elton Jantjies controlled proceedings well from the pivot position, and it was he who kicked three penalties to cut the deficit to four points.

That though was the cue for the Sharks to regain their composure and go back on the offensive, with Daniel making a superb break that transferred all the pressure onto the Lions, and in no time at all two more penalties had allowed the Sharks to reassert their seven-point buffer.

Daniel may have played well, as did fullback Louis Ludik, but they weren’t happy chappies in the last quarter as the Lions scored 13 points without reply, five of those points coming through a try that the Sharks hotly disputed and which was referred to the TMO by the referee.

Eventually the try was awarded because there was no evidence that the ball had been knocked forward by replacement flanker Jaco Kriel as he tried to pick it up off the floor at the start of a move that led to wing Ruan Combrinck scoring in the left hand corner.

Jantjies had earlier kicked a penalty from in front so the try, scored in the 69th minute, put the Lions into the lead. By failing to kick the angled conversion, Jantjies left it at a one-point game with 10 minutes to play, but it soon became six points as in the 72nd minute Kriel scored his try.

Lions coach Johan Ackermann opted a few minutes later to replace Jantjies with Butch James, and it proved an inspired move, as it was the World Cup-winning 2007 Bok flyhalf who produced the tackle near his line in the final minute that earned the Lions the put-in at the final scrum of the match.

With time up, all the Lions had to do was win the ball and control it, which they did, and James kicked it into the stands to secure an exciting victory that puts his team three points clear of the Sharks at the top of the log.