The final – a repeat of the 2010 showpiece won 30-10 by the men from Durban – will take place on Saturday at Mr Price Kings Park, with kick-off scheduled for 17h00.

It is the Sharks’ fourth final in five years – their third at home during this time – and they will be gunning for a third title to go with those won in 2008 (14-9 over the Blue Bulls, in Durban) and two years ago.

In the first semi-final, flyhalf Pat Lambie, who was an instrumental part of the Sharks’ dominant victory in the 2010 final, turned in a second man-of-the-match performance in as many weeks to help his side to a 20-3 win in Durban in a match played on a rain-drenched pitch.

And at Coca-Cola Park in Johannesburg, Lions flyhalf Elton Jantjies kicked what seemed like a match-winning penalty with 90 seconds remaining – only for WP to maul flanker Deon Fourie over the line on the hooter to seal a famous come-from-behind win and so end the defending champions’ reign. 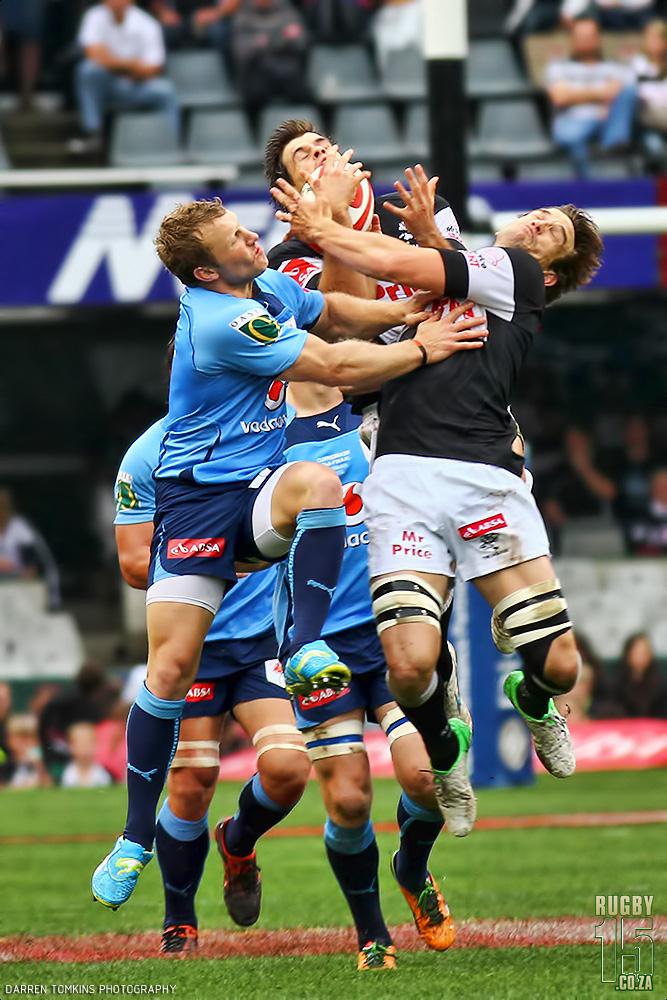 The Sharks vs Blue Bulls was an one-sided affair in Durban, with the hosts winning the rights to host the Final on Saturday. Photo by Darren Tomkins /Rugby15.

Another impressive performance by Pat Lambie inspired the Sharks to a comprehensive win over the Vodacom Blue Bulls to power their way into the Absa Currie Cup final.

If ever there was a time that Lambie could send Bok coach Heyneke Meyer a clear message of his intentions to play flyhalf for the national team, the wet and muddy Durban game was the perfect moment.

With conditions not ideal for running rugby, the Sharks kept their composure more and capitalised on the Blue Bulls’ indiscipline and mistakes, and simply built an innings around Lambie’s boot as the visitors disintegrated in their own frustration.

The Sharks controlled the game from start to finish as their pack gained ascendency; they bettered the Blue Bulls in the scrums and made far less mistakes with ball in hand.

This resulted in almost no ball to attack from in the first half, and the Sharks reveled in their dominance up front. With so much ball and so many attacking opportunities, the pressure had to tell. And with it the Blue Bulls started giving away penalties.

Lambie may have missed his first one, but then slotted a perfect second and simply didn’t look back. But his all-round control of the game was a sign of maturity, and it was costly for the Blue Bulls as he saw space behind the defence on the half hour, and chipped only to be stopped by a trip by prop Morné Mellett.

Mellett was lucky to get only a yellow card but the indiscretion was still costly, as Lambie slotted two more penalties in Mellett’s absence to let the home side lead 9-0 at the break.

In the second half the Blue Bulls’ discipline disintegrated even more, and Lambie kept on slotting the penalties. By the time the reserves started appearing the Sharks were 15-0 up and even when Morné Steyn finally got a shot at goal, the game was virtually over.

Lwazi Mvovo slid in at the corner to put the game beyond doubt, and the Sharks were already looking forward to a home final by then. 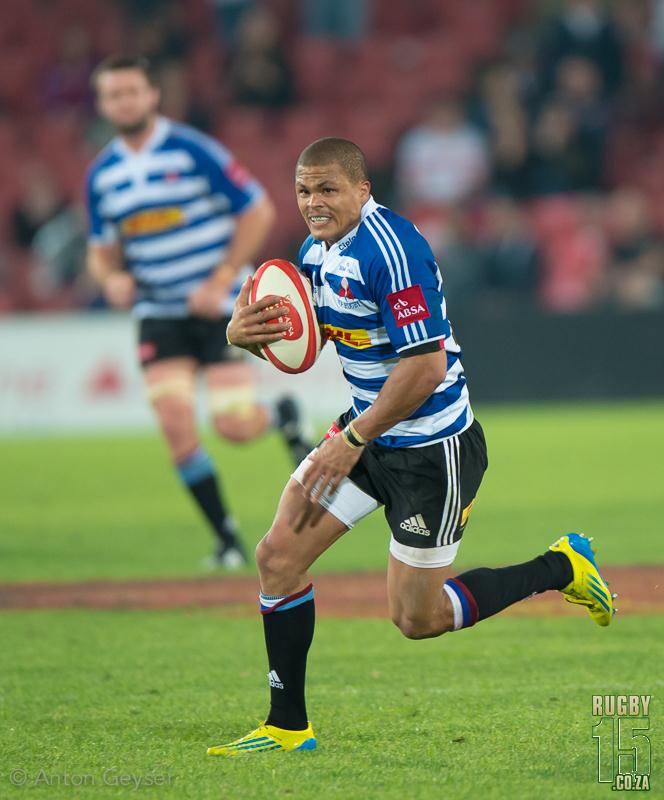 Juan de Jongh proved too much in the midfield as the men from Cape Town snatched victory in the dying minutes of the game. Photo by Anton Geyser /Rugby15.

The MTN Golden Lions’ reign as Absa Currie Cup champions came to a dramatic end at Coca-Cola Park as a driving-maul try on the hooter clinched DHL Western Province a famous semifinal win.

The Lions will feel they did everything but win as they were the better team for much of the way and put WP under sustained pressure, but they failed to capitalise on their many opportunities and were left to rue the mistakes late in the game that could be said to have grabbed them defeat from the jaws of victory.

Certainly it looked as if the Lions were on their way to their second consecutive final when flyhalf Elton Jantjies made up for some horrendous early misses by kicking an angled pressure penalty 90 seconds from time that put his side two points ahead.

But then came a mistake when they failed to clear their line from the restart, and WP pulled out the most tried and trusted try-scoring method by mauling their way 17 metres for the match-clinching score off the final move of the game.

There was plenty to enthuse about from the WP attacking play in the second half, with the introduction of Joe Pietersen at fullback and Louis Schreuder as the flyhalf in the last quarter making a dramatic difference to a game that they were losing at that point, but in the end it was that lineout maul that lost the Lions the game.

Jaco Taute, destined to play for the DHL Stormers in Vodacom Super Rugby next year, will kick himself for his role in his team’s demise. He kicked directly into touch in trying to clear the Lions’ red zone and was adjudged by referee Marius Jonker to have done so after the ball was carried back into his 22.

So instead of the Lions getting away from the 22-metre area, they ended up having to defend as Scarra Ntubeni fed the lineout and WP drove inexorably to the line, where flanker Deon Fourie eventually touched down.

It was a sad way for the Lions to end competitive rugby for the season as they head into the no-man’s land that they will find themselves in next season when they watch the Super Rugby tournament played without them.