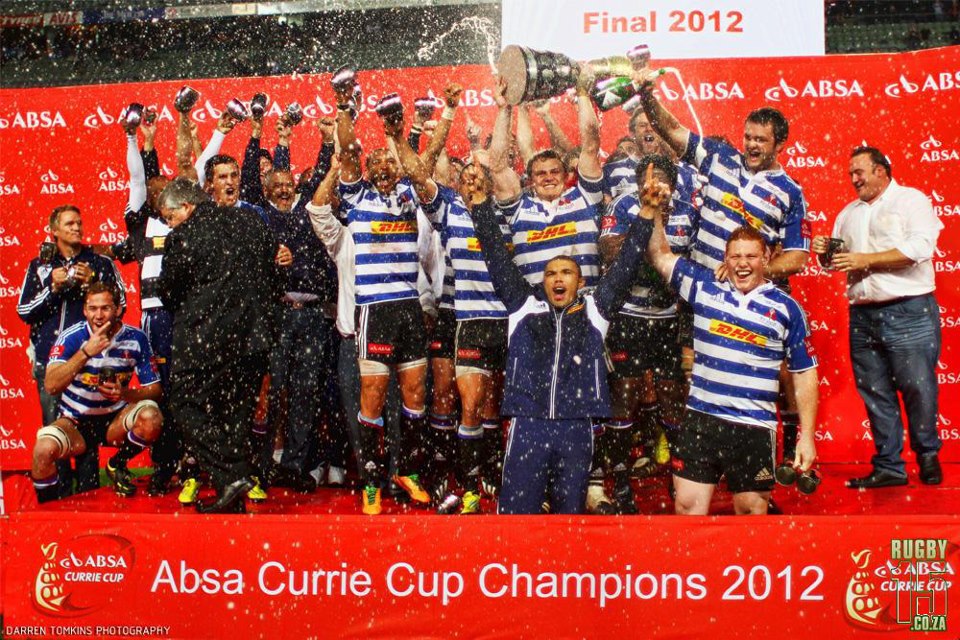 DHL Western Province finally ended their 11-year Absa Currie Cup drought when they beat favourites the Sharks 25-18 at Mr Price Kings Park in Durban on Saturday to claim their first title since 2001.

It was WP’s third win in four finals against the Sharks this millennium, following their victories in 2000 and 2001, with their only defeat coming in 2010 in Durban when the hosts won 30-10 thanks to 25 points from flyhalf Pat Lambie.

Lambie was in action again on Saturday, kicking all the Sharks’ points, but it was his WP opposite number, Demetri Catrakilis, who stole the show with a match-winning performance.

Catrakilis, who only two years ago was playing for False Bay Rugby Club in the Western Province Super League, kicked 17 points, including two second-half drop goals, to send long-suffering Cape supporters into ecstatics.

Catrakilis, who was playing his last match for WP before moving to Port Elizabeth to join up with the Kings franchise for their Vodacom Super Rugby preparations, also came within one point of finishing as the competition’s top point-scorer. Eventually he ended second, on 136 – just one point behind Vodacom Blue Bulls pivot Louis Fouchè.

For the Sharks, the defeat was their fifth in seven finals since 2000 and their second on the trot, following their heavy loss to the MTN Golden Lions in the 2011 final in Johannesburg.

DHL Western Province completed one of the biggest upsets in the history of Absa Currie Cup finals when they took charge of the second half of a high-quality final at Mr Price Kings Park to register a famous victory over the heavily favoured Sharks.

The visitors scored the only try of the match and were thoroughly deserved victors as they capitalised on the momentum shift that they received courtesy of a brilliant Juan de Jongh try seven minutes before halftime that effectively swung the match their way.

WP had uncompromising, aggressive defence and a dominant lineout to thank for the victory, which ends 11 years of drought at Newlands when it comes to major trophies.

The last time WP won the Currie Cup was when they beat the Sharks in Cape Town in 2001, but given the youth in their team, it is unlikely they will have to wait so long before tasting more success.

Every person and their dog was betting on a Sharks win in front of their home crowd, and it was for good reason as the Sharks were much closer to full strength than the younger WP team, and they were also the form team in the competition.

But sport wouldn’t be sport if the form book didn’t sometimes get thrown out of the window, and like 1990, when Natal won for the first time, and 2005, when the Cheetahs shocked the Bulls, that is what happened here.

That swing came when De Jongh cut inside off flyhalf Demetri Catrakilis and beat two defenders as he weaved his way through 40 metres to score off a scrum that was set near the Sharks’ 10-metre line.

The Sharks had been leading 12-3 just six minutes earlier and everything seemed to be going according to script.

But Joe Pietersen had landed a long-range penalty shortly before that to cut the deficit to six, so Catrakilis’s conversion of the De Jongh try put WP into the lead for the first time.

And they extended that lead to four points as Catrakilis kicked a penalty to complete an amazing turn-around in the last 10 minutes of the half as they went to the break 16-12 up.

The Sharks started the second half strongly and reclaimed the lead with a brace of Lambie penalties, but the home side faded badly thereafter and didn’t look anything like the team that had been so good in the semi-final against the Vodacom Blue Bulls – but then you only play as well as you are allowed to.

WP made a couple of poor decisions when in the strike zone on attack around the hour mark that might have cost them another try, but a period of sustained pressure eventually forced the inevitable penalty, which Catrakilis kicked from in front with 16 minutes to go to take his team into a one-point lead.

Then came two magical Catrakilis moments that secured it for the visitors, with the young pivot producing his finest performance of the season when it mattered most and setting a fitting seal on a WP career that now comes to an end as he prepares for his move to Port Elizabeth.

Catrakilis’s tactical kicking played a massive part in the WP win, but his two drop goals were the ones that ensured that the points difference would be a bridge too far for the Sharks.

The first came in the 67th minute and the second, a left-footed stab, in the 76th, effectively ensured that the best the Sharks could do in the final plays was steal a draw and force the game into extra time by scoring a converted try.

They nearly did it too as they burst away down the right flank, but a poor decision and misdirected final pass robbed them of what would surely have been a try underneath the posts.

For Deon Fourie’s brave young team it was sweet revenge for what the Sharks had done to the Stormers in the Super Rugby semifinal, as well as for their defeat in Durban in the 2010 final.

Top 10 point-scorers – After the Final:

*Rhule finished as the competition’s top try-scorer for 2012, with eight tries.