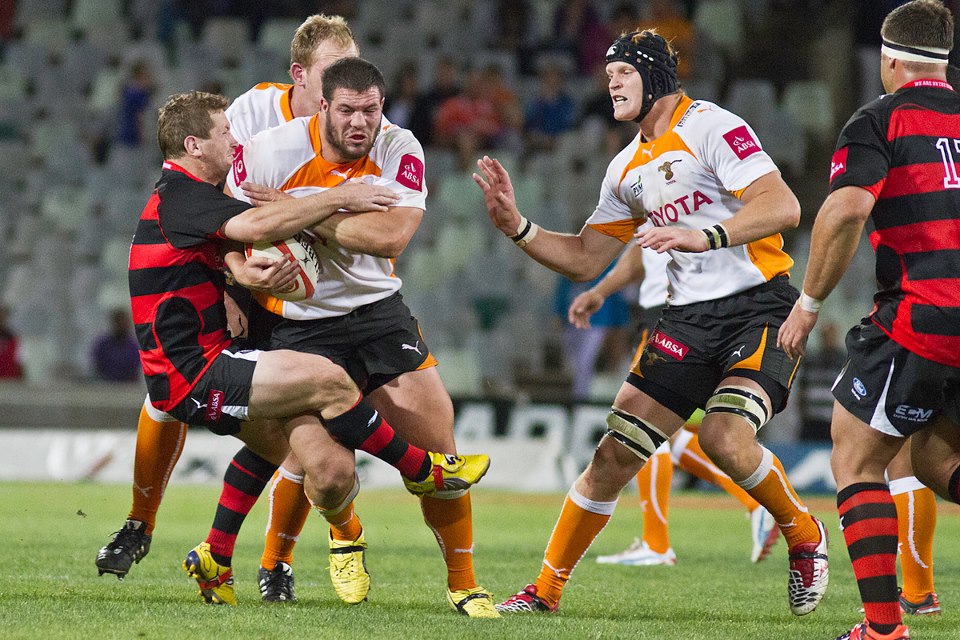 Big Marcel van der Merwe was heavily instrumental in the Cheetahs resounding victory over the EP Kings. Friday will be his last ever game in a Cheetahs jersey before moving to the Bulls. Photo by Jako Pienaar.

THE Eastern Province Kings will have it all to do in Port Elizabeth on Friday night when they attempt to wipe out a 39-point deficit in the second leg of their Absa Currie Cup promotion-relegation series against the Toyota Free State Cheetahs, following a 53-14 first-leg defeat in Bloemfontein on Friday.

With a log-point system in operation for the series, and the Cheetahs having picked up a full haul of five points and the Kings none, it means that for the Kings win promotion to the Premier Division next year they would not only have to beat the Cheetahs by 40 points or more at the Nelson Mandela Bay Stadium, but also make sure they denied the visitors a try-scoring bonus point in the process.

The Kings earned the right to play in the promotion-relegation series after Alan Solomons’ men topped the First Division log at the conclusion of the competition’s round-robin matches.

The Toyota Cheetahs gave the EP Kings a rude awakening to the rigours of top-flight rugby as they virtually ended any chance of the Kings being promoted to the Absa Currie Cup Premier division next season.

What the Kings feared most turned out to be the harsh reality of the evening. Even though the Cheetahs could only win three of their 10 games in the Premier Division, they were miles ahead in terms of intensity, passion and drive.

There was always a danger this would happen, and the Cheetahs, after having their backs against the wall and in a week where they were heavily criticised in their own town by their own supporters, were never going to give an inch to their opponents.

Instead they were ruthless, scoring eight tries to two, and grabbing the important bonus point before half time to ensure the victory was theirs way before the second half started.

And they started in style as a massive build-up showed how patient the home side could be, right until the overlap came and Nico Scheepers ran in at the corner after just five minutes to score the opening try.

Ross Geldenhuys added a second in the next foray into the Kings’ 22, and it wasn’t long after that Phillip van der Walt planted the ball on the line as the Cheetahs extended their lead in the first half.

The coup de grace, however, came as try-scoring sensation Raymond Rhule took the ball in his own half and simply sprinted past the Kings’ defence on the outside, and then passed to Andries Strauss at just the right moment for him to add the bonus-point try.

At 24-0 at the break the writing was on the wall, but the Kings did come out strongly at the start of the second half and scored a brace of tries in just seven minutes as Devin Oosthuizen and Shane Gates touchdowns gave them some hope of closing the gap.

But it was left to the Strauss family to hammer the final nails in the coffin as first Andries went over for his second and then captain Adriaan grabbed an optimistic intercept and sprinted 50 metres to the opposite tryline to seal the Kings’ fate.

By the time Ryno Benjamin added his name to the scoresheet, the Kings were already contemplating the long flight home and their future in the First Division.

Top 10 First Division point-scorers for the season (up to & including Final):