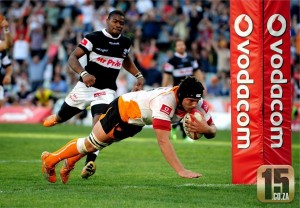 The Toyota Free State Cheetahs sent out a strong warning that even though they are lingering in fourth position on the Absa Currie Cup log, they have what it takes to run with the front runners.

And the Vodacom Blue Bulls showed that they are not to be written off, yet.

The Free Staters were sublime as they dismantled The Sharks by 53-32 in Bloemfontein, after which the Blue Bulls got back to winning ways when the beat DHL Western Province by 28-20 in a hard-fought match in Pretoria.

The Ford Pumas scored their first victory of the season in a nail-biter against GWK Griquas in Kimberley on Saturday by 34-31.

Earlier, on Friday evening, the MTN Golden Lions won their ninth game of the season against the Platinum Leopards in Potchefstroom (43-23). They have opened up a 10-point lead at the top of the standings and look set to clinch a home semi-final.

In the Absa Currie Cup First Division, the Tasol Solar Griffons moved up to third on the log when they beat the SWD Eagles in George on Friday evening, while the EP Kings kept their unbeaten record intact against the Valke in Port Elizabeth.

The MTN Golden Lions were too strong for the Platinum Leopards and easily won the first Absa Currie Cup Premier Division match of the weekend by 43-23 at Profert Olën Park in Potchefstroom on Friday evening.

It probably wasn’t the team from Johannesburg’s best performance of the 2011-season, but they still looked very dangerous when they flung the ball wide. However, that didn’t happen nearly enough in this game, mostly because of unnecessary errors by the visitors.

The Leopards scored both their tries – by Johann Laker and Gavin Williamson – in the final five minutes of the match, giving their score a bit more respectability.

The Toyota Free State Cheetahs delivered arguably their best performance of the season when they crushed the defending Absa Currie Cup champions, The Sharks, by 53-32 at the Free State Stadium in Bloemfontein on Saturday afternoon.

It was a complete performance by the Cheetahs, who scored five tries to the KwaZulu-Natalians’ four. The big difference between the two sides though was the performance of SA Under-20 flyhalf Johan Goosen, who was in sublime form as he contributed 29 points to the home team’s cause.

Goosen, who was still at school last year, scored a try, kicked five penalty goals, three conversions and a dropped goal before he left the field injured with 15 minutes to go.

Where the Cheetahs played with intent on attack and defence, The Sharks struggled with their tackling and made way too many unforced errors. Their discipline was also not at its best.

When replacement lock Jandre Marais was sent to the sin bin in the 61st minute for a dangerous tackle, the Toyota Free State Cheetahs scored two converted tries to open up a handy lead on the score board. After that, The Sharks’ challenge was effectively over.

The Ford Pumas finally recorded their first victory of the 2011-season when they beat GWK Griquas by 34-31 at GWK Park in Kimberley on Saturday afternoon, with a winning try in the dying seconds of the game.

The try started deep in their own half with a tap penalty, followed by good runs by Pellow van der Westhuizen and Dewald Pretorius, and was rounded off by fullback Carl Bezuidenhout, moments after the home team’s Riaan Viljoen scored for his team to put them ahead with four minutes left in the game.

It was just-reward for the Pumas, who scored bonus points for losing with seven or less points in four of their nine defeats this year.

Van der Westhuizen also scored one of the Ford Pumas’ four tries, with Ricardo Croy and Hendrik van der Nest also crossing for the visitors. Seven of the eight tries scored on the day came in the second half when both teams weren’t shy of playing attractive, attacking rugby.

The Vodacom Blue Bulls won their first game in almost a month and kept their semi-final aspirations alive when they beat DHL Western Province in an action-packed Absa Currie Cup Premier Division match at Loftus Versfeld in Pretoria on Saturday.

Two converted tries in the first half, by CJ Stander and Zane Kirchner, and two penalty goals by Francois Brummer, who came into the side for Louis Fouché at flyhalf, helped the Blue Bulls to a handy 20-3 lead, even though they lost two of their most experienced backs, Jano Vermaak and Akona Ndungane, to injuries in the first half hour.

DHL Western Province came back strongly after the break and scored three tries as they chased the game, but the home team’s 17-point buffer at the break was always going to difficult to bridge.

The team from Cape Town managed to close the gap to just eight points with tries by Danie Poolman and Marcel Brache, but when Wynand Olivier went over with 10 minutes to go, the Blue Bulls opened it up to 13 points again. Siya Kolisi scored a late try for DHL WP.

The game was played at a very high tempo, epitomised by the five minutes of breathless rugby after the hooter had sounded as both teams searched for a fourth try (and in WP’s case, a second bonus point for getting to within seven points of the hosts).

Despite the result, both teams stayed where they were on the Absa Currie Cup log – the Vodacom Blue Bulls in sixth position, now only one point behind GWK Griquas, and DHL WP second, 10 points behind the MTN Golden Lions.

After a great victory at Outeniqua Park in George, the Tasol Solar Griffons moved into third position on the Absa Currie Cup First Division log.

The Griffons beat the SWD Eagles by 39-27 on Friday night. It was only their second victory in nine matches this season, but they have scored a handy bunch of bonus points that saw them pass the Eagles on the log.

Nicky Steyn (No Eight) and Japie Nel (inside centre) both scored a brace of tries for the winning side, with Tiaan van Wyk (flyhalf) adding 16 points with the boot.

Down the road in Port Elizabeth, the EP Kings ran in six tries as they remained the only unbeaten team in the Absa Currie Cup when they beat the Valke by 40-10 at the Nelson Mandela Bay Stadium in Port Elizabeth on Friday.

The Kings are now six points clear of the second-placed Regent Boland Cavaliers, who had a bye this weekend and have played one fewer game than the Kings. The two top sides in the First Division play each other in Wellington on Friday.