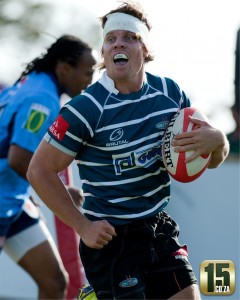 On the other side of the spectrum, GWK Griquas won a great match against the Vodacom Blue Bulls, all but knocking the team from Pretoria out of the competition.

While they still have a mathematical chance to qualify for the semi-finals, the Blue Bulls and Griquas have to rely on a favour from the Ford Pumas next weekend. If the team in light blue don’t make it through, it will be the first time since 2001 that they don’t qualify for the knock-out phase of the Absa Currie Cup.

The Sharks and the Toyota Free State Cheetahs also qualified for the semi-finals and next weekend’s final round of league action will determine which of these two teams will have home ground advantage.

A late yellow card to lock Eduan van der Walt probably cost the Ford Pumas as the Toyota Free State Cheetahs scored two tries against only 14 defenders to win this pulsating Absa Currie Cup match at the Puma Stadium in Witbank by 29-23.

When Van der Walt was sent to the sin bin in the 72nd minute, the Pumas were leading by 23-17 and on their way to a famous upset. But the Free Staters knuckled down as Sias Ebersohn and Andries Strauss scored late tries to seal the victory.

Like they’ve done for most of the 2011 season, the Pumas fought well above their weight and again came agonisingly close to beating a more-fancied opponent. They lead 13-7 at the break and even though the Cheetahs fought back, the home side extended their lead to 23-17 midway through the second half.

After this bonus point victory, the Cheetahs briefly moved into second position on the log, but they were down to third again on Saturday after The Sharks beat the Platinum Leopards in Phokeng.

GWK Griquas effectively ended the Vodacom Blue Bulls’ semi-final charge and at the same time kept alive their own slim hopes of reaching the playoffs when they won a high-scoring match by 48-44 at GWK Park in Kimberley on Saturday afternoon.

Both teams scored six tries each, with Matthew Rosslee and Rocco Jansen both crossing twice for the home side and former Griquas wing Bjorn Basson, now in the colours of the Blue Bulls, also got a brace.

The visitors started both the first and second halves stronger, but each time they failed to keep up the pressure and Griquas fought back. The Bulls Blue lead 15-3 at one stage in the first half only to go into the break trialling 22-27.

Early in the second half the visitors were again rampant, even though their captain, Gary Botha, was sin-binned, and tries to Jano Vermaak and Jacques Potgieter saw them go ahead by 39-27, but three tries between the 60th and 70th minutes broke the Blue Bulls and gave Griquas the momentum.

The Blue Bulls made way too many unforced errors and even though they came back with a late try to secure two bonus points, it wasn’t enough.

Five tries to one tell the full story as the MTN Golden Lions secured first place on the Absa Currie Cup log with a solid 42-25 victory over DHL Western Province at Coca-Cola Park in Johannesburg on Saturday.

SA Under-20 fullback Jaco Taute got two of the Golden Lions’ tries as they won the game in all facets of play.

Both hookers, Bandise Maku and his replacement Martin Bezuidenhout, also scored before Derick Minnie rounded off a good performance for the home team with a bullocking run to score after the hooter had sounded.

By contrast, DHL WP had to rely on the boot of their flyhalf Demetri Catrakilis to keep the scoreboard ticking over until Deon Fourie scored against the run of play in the 67th minute.

A bonus point victory next weekend in Cape Town over the Ford Pumas would be enough for DHL Western Province to advance to the semi-finals, while the Golden Lions will have to wait to see who finishes fourth for their semi-final in Johannesburg.

The score was big at the Royal Bafokeng Stadium in Phokeng on Saturday evening as The Sharks beat the Platinum Leopards by 41-14 in the final Absa Currie Cup game of the weekend.

And even though The Sharks kept alive their chances of a home semi-final, their victory perhaps wasn’t as impressive as the score board showed, after they got two converted tries in the final three minutes when the physicality and intensity of the match clearly took its toll on the home team.

Nonetheless, The Sharks still scored six tries to the two of the Platinum Leopards, of which the second-half effort by Namibian Rugby World Cup winger Danie Dames was probably the best of the night.

Jean Deysel, again playing at lock, was probably the pick of the players on a night where Stefan Terblanche became the first player in history to record 100 games at Absa Currie Cup and Vodacom Super Rugby level for one provincial union.