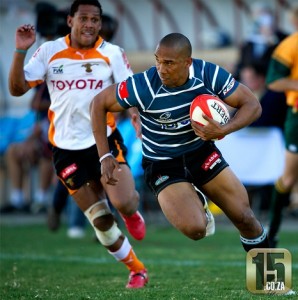 The MTN Golden Lions ended the first round of the Absa Currie Cup Premier Division at the top of the standings after they saw off second placed The Sharks in Johannesburg on Saturday.

It was the Golden Lions’ sixth win from their first seven matches as they moved up to 27 log points, five ahead of DHL Western Province and The Sharks. Just one point behind the two coastal sides are GWK Griquas, who fought back with two late tries to win their central derby against the Toyota Free State Cheetahs.

DHL WP and the Vodacom Blue Bulls had to work hard for their victories in over the Ford Pumas in Witbank and the Platinum Leopards in Phokeng on Friday evening.

In the Absa Currie Cup First Division, the EP Kings and Regent Boland Cavaliers have put daylight between them and the chasing pack of teams in a competition that is now truly a two team race.

The Vodacom Blue Bulls won their third consecutive Absa Currie Cup game when they beat the Platinum Leopards by 28-20 in a scrappy game that only really got going after the break at the Royal Bafokeng Stadium in Phokeng on Friday evening.

The Blue Bulls could not replicate their good performance from a week ago against GWK Griquas and although they tried hard, they could not score a fourth try for a bonus point. Rather, it was the Platinum Leopards who crossed the team from Pretoria’s try line late in the match to close the gap on the score board.

Interestingly enough, the visitors’ three tries were all scored by forwards, Warwick Tecklenburg (flank), CJ Stander (Number 8) and Werner Kruger (prop), where they clearly had the ascendancy.

However, Leopards backs George Tossel (fullback), Jovan Bowles (centre), Joubert Engelbrecht (centre) scored their three tries, perhaps indicating that the home team had the upper hand at the back, where the Vodacom Blue Bulls looked disjointed and just could not get going.

The Blue Bulls were stronger in the lineouts and scrums, but could not capitalise on this as unforced errors at the back cost them valuable attacking momentum. The Platinum Leopards did tackle like tigers, but they also conceded a number of penalties on defence.

Unfortunately for the visitors, their young flyhalf, Louis Fouche, had an off night with the boot, slotting only four out his nine kicks at goal. The Leopards’ kickers, Wesley Dunlop and Tossel, fared even worse and were successful with only two attempts from eigth kicks at the posts.

It perhaps wasn’t their best performance of the season, but DHL Western Province still left the Puma Stadium in Witbank with four valuable Absa Currie Cup log points after beating the Ford Pumas by 24-13 on Friday evening.

Ultimately DHL WP could only score three tries against a side that came back from last weekend’s heavy defeat to the Toyota Free State Cheetahs with a much more composed performance, but the visitors’ discipline also let them down, with Conrad Jantjes and Nick Koster spending time in the sin bin.

However, the team from Cape Town had too much fire power at the back for the Pumas, where outside centre Johann Sadie again showed his immense talent. Sadie, who is bound for the Blue Bulls next season, was instrumental in all of WP’s tries, scoring the first and contributing to the other two.

The Ford Pumas did not leave empty handed, with Hendrik van der Nest (scrumhalf) and JP Mostert (replacement lock) dotting down for the home team in the second half.

GWK Griquas stayed firmly in the hunt for a semi-final berth when they rallied late in their Absa Currie Cup game against the Toyota Free State Cheetahs to win by 23-20 at GWK Park in Kimberley on Saturday afternoon.

Halfway through the second half, it looked like the Free Staters were going to record a good away win in their neighbours’ back yard, but two late tries, by Riaan Viljoen and Jean Stemmet, put Griquas ahead – a lead they never relinquished.

Both tries were superb solo efforts while the Cheetahs had to defend with only 14 men, as prop Marcel van der Merwe was sitting in the sin bin. It proved the difference in a hard fought derby where the team from Bloemfontein did everything to win the game, but failed to do so.

Flyhalf Sias Ebersohn and scrumhalf Pieter van Zyl scored in the first half for the Cheetahs, while fullback Rudi Vogt kept Griquas in the loop with three penalty goals. Things were quite even in the second half, until Van der Merwe was yellow carded and Viljoen and Stemmet took off.

It was the Elton Jantjies show at Coca-Cola Park in Johannesburg on Saturday as the MTN Golden Lions beat The Sharks by 28-19 in a high intensity top of the table Absa Currie Cup clash.

Lions flyhalf Jantjies produced a flawless kicking display as he landed all eight his kicks at goal for a personal contribution of 23 points, that had most of the almost 32,000 spectators smiling at the end of the game. The Golden Lions last won the Absa Currie Cup in 1999.

Each team could only score one try – Lionel Mapoe for the Golden Lions and Stefan Terblanche for the Sharks – but the big difference was Jantjies, who punished the visitors for a number of indiscretions at the breakdown.

Apart from his superb display with the boot, Jantjies also produced the goods on the attack, keeping the Sharks guessing with a number of good runs, one of which lead to Mapoe’s try in the first half

Where The Sharks, the current defending champions, struggled to get their hands on the ball in the first half, it was a different story after the break, but the home team’s defence held out as they won an entertaining match to end the first round of the 2011 Absa Currie Cup.

The Kings crushed neighbours SWD Eagles in George by 60-24, with SP Marais contributing 24 points through four tries and two conversions. The former Paarl Boys High fullback tops the try scoring stakes in the First Division with nine and was EP’s most dangerous weapon at Outeniqua Park.

The team from Port Elizabeth crossed the Eagles’ try line nine times as they scored 60 points in a match for a third time this season.

Down the N2 in East London, the Border Bulldogs gave their all, but did not have enough fire power for the Regent Boland Cavaliers as the team from Wellington remained in second position on the Absa Currie Cup First Division log thanks to a 36-15 victory at the Buffalo City Stadium on Friday night.

The visitors started the game like a house on fire, taking a 12-0 lead after only five minutes thanks to tries by fullback Willie le Roux and left wing Brendon April. Thereafter, the Bulldogs had to play catch up rugby, but never had enough in the tank to really trouble the Cavaliers on the score board.

On Saturday in Welkom, the Tasol Solar Griffons moved away from the last position on the Absa Currie Cup First Division log when their flyhalf, Tiaan van Wyk, kicked 21 points in their 46-21 victory over the Valke at the North West Stadium.