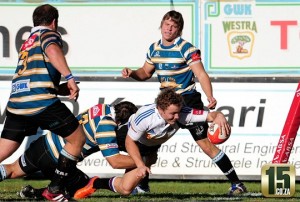 The MTN Golden Lions have held onto the top spot on the Absa Currie Cup Premier Division log after they beat the Ford Pumas in Nelspruit on Friday evening.

However, the chasing pack have not let go after DHL Western Province, The Sharks and the Toyota Free State Cheetahs scored good victories on the road on Saturday.

In the Absa Currie Cup First Division, the EP Kings and Regent Boland Cavaliers have confirmed their dominance by winning their games this weekend.

The MTN Golden Lions had to withstand a second half fight back from the Ford Pumas, but managed to hold on as they stayed at the top of the Absa Currie Cup pile after winning this Premier Division game by 34-20 at the Mbombela Stadium in Nelspruit on Friday evening.

After the visitors dominated the first half and went into the break 27-6 ahead, the Ford Pumas turned the tide in the second half as they managed to control possession better and made the Golden Lions work hard on defence.

The Ford Pumas outscored the Golden Lions by two tries to one after the break and were only seven points behind at the end of normal time, but the team from Johannesburg managed to get replacement lock Johan Snyman over for a bonus point try after the hooter had sounded.

It was the MTN Golden Lions’ seventh victory from eight games and with six games to go in the league phase of the Absa Currie Cup, they are on track to a home semi-final.

DHL Western Province won a high-scoring Absa Currie Cup match at GWK Park in Kimberley on Saturday afternoon after they had to fight back when GWK Griquas took an early lead in the match.

The home team started like a house on fire, taking a 15-0 lead midway through the first half thanks to tries by fullback Rudi Vogt and flank Davon Raubenheimer.

But WP held their nerve and scored three converted tries in the final 15 minutes of the first half to take a 21-15 lead at the break.

Seven more tries – four to WP and three to Griquas – followed in the second half as both teams played an open and attacking game. A total of 12 tries were scored in the game, with Vogt, Raubenheimer and WP wing JJ Engelbrecht each bagging a brace of five pointers.

Two tries in the first half by Springbok prop Coenie Oosthuizen set up a massive 64-17 Absa Currie Cup victory for the Toyota Free State Cheetahs over the Platinum Leopards at Profert Olën Park in Potchefstroom on Saturday afternoon.

Oosthuizen got his first while Leopards centre Joubert Engelbrecht was in the sin bin following a yellow card. He got his second late in the first half as the Cheetahs went into the break ahead by 24-3.

The visitors had way too much firepower and scored nine tries in their second high scoring game in three weeks. Two late tries by the Platinum Leopards, one by Engelbrecht, gave their score a bit of oomph, but it was never enough against a rampant Cheetahs side, who moved into fourth on the Absa Currie Cup log.

The Sharks capitalised on bad discipline, handling and kicking by the Vodacom Blue Bulls as they won an entertaining Absa Currie Cup match at Loftus Versfeld in Pretoria by 39-27 on Saturday evening.

The Blue Bulls were behind 9-0 early in the match as Sharks centre Meyer Bosman made them pay for their ill-discipline with three long range penalty goals. When Springbok Sevens speedster Sibusiso Sithole scored a well worked try a bit later, the home team looked dead and buried at 16-0 down after only 18 minutes.

But they fought back well and never gave up. In the end the Vodacom Blue Bulls simply gave away too many penalties within kicking range, which Bosman and Sharks flyhalf Fred Michalak converted into points. The KwaZulu-Natalians’ two kickers had a good night with their boots, converting nine out of ten kicks at goal. The visitors also defended very well.

In contrast the Blue Bulls’ young pivot Louis Fouché struggled with the boot – he missed four out of his six kicks at the posts, which probably cost the team from Pretoria a second bonus point.

Two tries in the final two minutes, with the Sharks having already won the game, saw the Blue Bulls leave with one bonus point.

The EP Kings had to work hard against neighbours Border Bulldogs but in the end had too much on the attack as they won by 51-36 at the Nelson Mandela Bay Stadium in Port Elizabeth on Friday.

The defending Absa Currie Cup First Division champions knuckled down in the final 20 minutes after the Bulldogs fought back early in the second half to trial by only 31-29 at the hour mark.

But replacement flyhalf George Whitehead slotted two penalty goals, while right wing Norman Nelson and loosehead prop Jaco Engels crashed over for the home team to put daylight between them and Border.

Ultimately, handling errors and turnovers almost cost the EP Kings in a performance they would be less than satisfied about, especially on defence, where they conceded five tries.

At Boland Stadium in Wellington on Saturday afternoon, the Regent Boland Cavaliers scored four tries in the first 30 minutes against the Tasol Solar Griffons in an Absa Currie Cup First Division match they won comfortably 47-29.

Boland lock Ligtoring Landman, who played for the Platinum Leopards earlier in his career, scored two tries in the first 10 minutes as the Cavaliers raced to a commanding lead against the Griffons. It was their sixth victory of the season as they stayed in touch with the EP Kings at the top of the log.

The Cavaliers scored a total of five tries, but it was flyhalf Elgar Watts who stole the show with a personal contribution of 27 points.