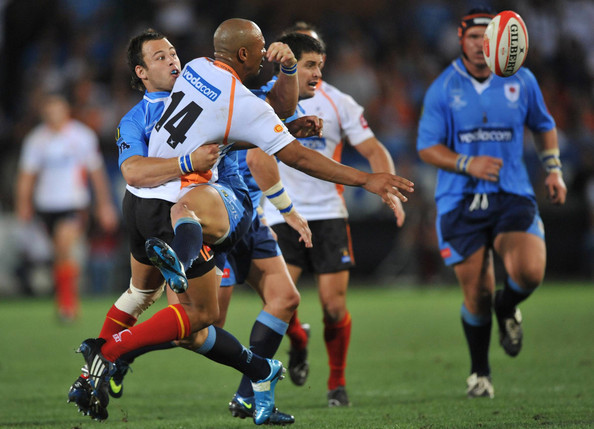 Lionel Mapoe of the Cheetahs tackled by Francois Hougaard of the Bulls during the Absa Currie Cup match between Blue Bulls and Free State Cheetahs from Loftus Versfeld on October 31, 2009 in Pretoria, South Africa. (October 30, 2009 - Photo by Gallo Images/Getty Images Europe)

Even before the Currie Cup final there has been much anticipation of the battle in the scrums. The Vodacom Cheetahs front row has destroyed most opposition in the scrums and has benefitted from the assistance of legendary Os Du Randt.

There was great disappointment amongst Vodacom Cheetahs supporters when Wian Du Preez and WP Nel were not included in the Bok squad for the end of year tour. Only after injury to the Springbok props was Wian Du Preez selected to join the Springboks on tour. WP Nel was rewarded for his strong performances in 2009 with inclusion in the Barbarians team who played against New Zeeland.

On the Bulls side Werner Kruger struggled against the props from both the Vodacom Cheetahs and Stormers, whilst Gurthro Steenkamp will admit to not having a good tour with the Springboks. He had to return to South Africa with an injury.

There is always huge pressure in the scrum battles between these two teams – but there will be added pressure tonight. We would like to refer to a few aspects to contribute to the enhanced focus at scrum time:

Neither of these props was contracted by SARU in the recent contract announcements. There is much uncertainty in Springbok ranks as to who our best props are and whether John Smit is a prop or a hooker. There is even a dispute whether Beast is a Zimbabwean or a South African!

The winner in the scrum battle during this clash will take a step closer to Bok selection.

Both sides feature an interesting component with the return of Gary Botha and Wian Du Preez from abroad. Botha gained much experience from a lengthy European visit, whilst Wian gained Heineken Cup through a brief stint at Munster. Much is expected from Wian Du Preez as Springbok and Vodacom Cheetah Prop forward in 2010!

Referees have indicated that the dominating scrum should be rewarded and that teams who take the scrum down would be penalized. There is now an important focus on having strong props who will not give away unnecessary penalties.

There are also other factors such as the return of former coach Heyneke Meyer to the Bulls camp. Even though he is not the coach, he is well-known as an expert of forward play and the slump in the Blue Bulls scrum would not have gone unnoticed by Meyer…

The winner of the clash tonight will not be decided only in the scrums…but this will be one of the most anticipated phases of the game!!

[Story from Rugby15 appeared on Blog of the Vodacom Cheetahs]