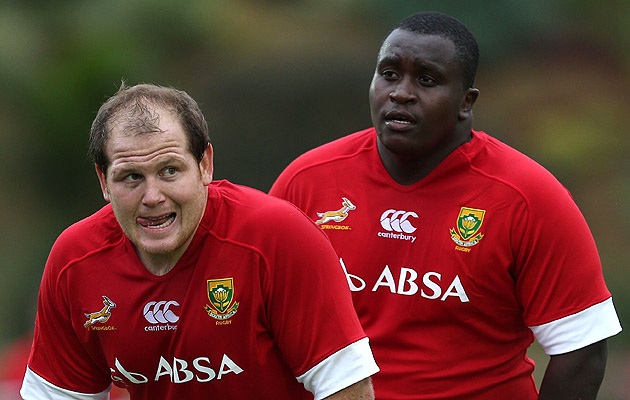 Experienced Springbok tighthead prop Jannie du Plessis has been ruled out of the forthcoming Castle Lager Outgoing Tour to Wales, Scotland and France because of injury.

His place in the touring team will be taken by the uncapped GWK Griquas prop Lourens Adriaanse, a member of the Springbok squad during the Castle Lager Rugby Championship who was on the official standby list and will play with Du Plessis for The Sharks next season.

Springbok coach Heyneke Meyer said: “Losing a player with Jannie’s experience and ability is a big set-back, but we’re lucky to have someone like Lourens to step in. He’s been part of the squad for almost the entire Test season and was one of the unlucky players to miss out on initial selection.”

The 30-year-old Du Plessis, who played in his 50th Springbok Test last month against Australia in Cape Town, was ruled out because of a chronic shoulder injury and a hand fracture.

“Jannie went for an MRI scan on his shoulder, while we also reviewed his recent hand injury with his specialist,” said Springbok team doctor Craig Roberts.

“He will only be ready for the Test against France and as player welfare is very important to us, we decided not to risk him on this tour.”

Another possible replacement for Du Plessis, Pat Cilliers, was also ruled out as he is going for surgery on a shoulder injury on Thursday.