Afrika back for the Blitzbokke 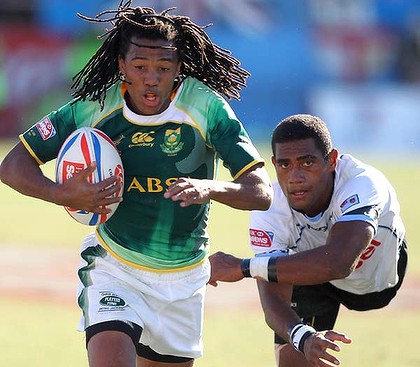 IRB Sevens Player of the Year Cecil Afrika will lead the Springbok Sevens attack on home soil in the Nelson Mandela Bay South Africa Sevens after the playmaker was included in the South Africa squad for the tournament which starts on Friday.

Afrika is one of two changes made to the team that lost to Australia in the Dubai Plate Final last Saturday. He replaces Renfred Dazel.

Robert Ebersohn has returned to Super Rugby pre-season duty with the Toyota Cheetahs and has been replaced by newcomer Cornal Hendricks from the Regent Boland Cavaliers.

Afrika did not play in Dubai after he suffered a rib injury in the season-opener in Australia three weeks ago. It will also be the first time this season that he will partner with scrumhalf Branco du Preez who sat out in the Gold Coast.

Springbok Sevens captain Kyle Brown said the prospects of playing at home in the new Nelson Mandela Bay Stadium will be a huge motivating factor for the team. “You only play once at home in nine tournaments so the guys are quite excited to run out in front of our own supporters.

“We did not play to our full potential in either of the previous two tournaments and will be looking to rectify the small mistakes and play to the standards that we have set for ourselves,” said Brown.