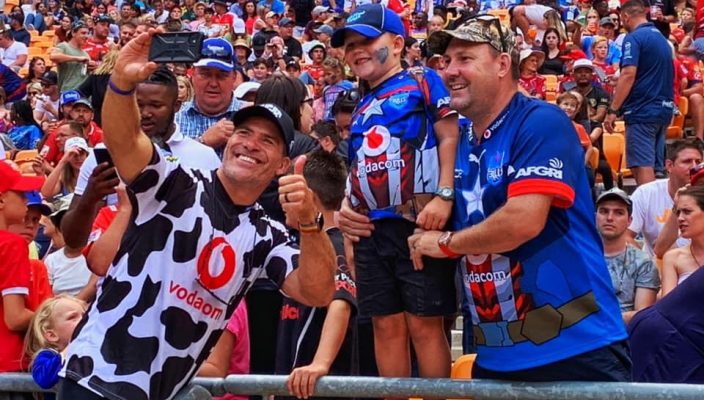 After World Cup, Brits is ready to make new memories

Schalk Brits is still revelling in the memory of the Springboks’ 2019 Rugby World Cup triumph. But it is a measure of Brits as a man that his most treasured memories have nothing to do with the William Webb Ellis Trophy. Instead, they involve a tent, a rugby field, and his three young boys.

As entries open for the 2020 Vodacom Father and Son Campout a day after Vodacom Super Rugby kicked off another “superpowered” season in partnership with Marvel at the Vodacom Super Hero Sunday extravaganza in Soweto, Brits was amongst the first to book his tent and a place in what has become the most sought-after experience for rugby-loving dads and their sons. Even if they’re Springboks.

“I experienced my first Vodacom Father and Son Camp Out last year and it was absolutely phenomenal,” says Brits as he looks forward to this year’s experience on the main field at Loftus Versfeld on Saturday 28 and Sunday 29 March. This unique event is exclusive to Vodacom Red clients.

“I have three boys all under the age of 10, and they loved it. I also loved it because I always feel a team should never isolate its players from the fans, and at an event like this I wasn’t just a player but also a dad sharing special memories with other dads. It’s an unbelievable experience.

“It’s not only a memory for the boys, but for me as well. We all know time is short. When you lie on your deathbed, you won’t remember what you achieved, but who you achieved it with. Those memories are what’s important to me.”

Brits returns to Loftus Versfeld as very much a “normal” dad having retired from rugby after the 2019 Rugby World Cup in Japan.

The theme for this year’s campout is #BeAPresentDad, and it’s something Brits can certainly relate to.

“I will always be thankful for my dad running with me at 5am so I could stay fit for rugby. He’d pull on the tekkies and do the run with me, and then he’d go to work. It’s a choice to be a dad, and making the time to be with my boys is precious to me.”

To register for the Vodacom Father and Son Campout brought to you by Vodacom ONE Family, visit www.redrewards.co.za  .