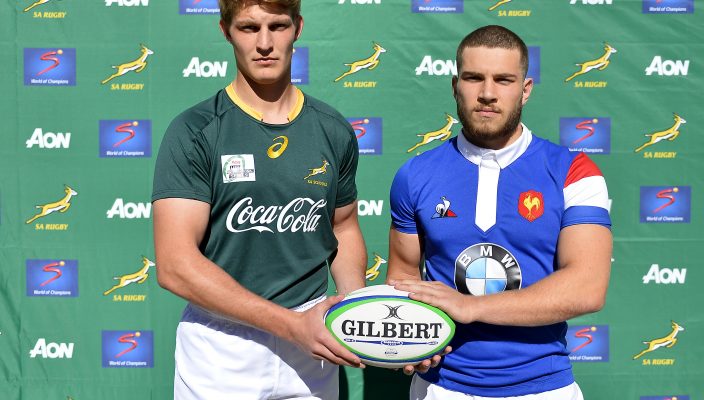 Alberts back to lead SA Schools against France

Adrian Alberts has shrugged off the injury niggle which ruled him out of action for the Aon Under-18 International Series opener over the weekend and will lead the SA Schools side in their second match of the series, on Tuesday against France.

This match, at Stellenberg High School in Durbanville, kicks off at 16h00. Wales and England’s U18 sides square off at 14h15 at the same venue.

SA Schools coach Sean Erasmus made 12 changes to his side that beat Wales by 43-40 at Boland Landbou on Friday. Only outside centre and vice-captain, Muzi Manyike, and the halfback pair of Juan Mostert (flyhalf) and Thomas Bursey (scrumhalf), will start again.

“All the players in the squad have worked hard and deserve a chance to get some game time,” said Erasmus.

“It’s good to have Adrian back and I’m looking forward to see him play with Lunga Ncube in the middle row, while we’ve also decided to use Sibusiso Sangweni at flank, to give us an extra option at the back of the lineout.

“The boys have seen France’s impressive performance against England and we know we’re in for a massive challenge on Tuesday, but we have shown that we’re a team with character in coming back to beat Wales, so I’m excited about the match.

“It’s been a short turn-around from Friday’s match against Wales, but we’ve put in a lot of very hard work to ensure we’re as well-prepared as possible for the French contest.”

The Aon U18 International Series fixtures are: