SA Rugby President, Mr Mark Alexander, praised the quality of rugby dished up during the exciting first week of the SA Rugby Youth Weeks festival, in which 1058 players played their part at two venues in Gauteng.

While the LSEN Week ended on Thursday, the SA Rugby Girls U16 and U18 Weeks came to a thrilling conclusion at Jeppe High School in Johannesburg on Friday as the Sharks and DHL Western Province both defeated Eastern Province to take top honours.

“I am very impressed with the quality of rugby in the first week of the SA Rugby Youth Weeks, and this will certainly bode well for the future of South African Rugby,” said Mr Alexander.

“It was particularly impressive to see how the skill levels and quality of games in the SA Rugby Girls Weeks have improved, and how the support for the women’s game has grown.

Western Province’s victory in the grand finale of the U18 Week not only ensured that they were the only unbeaten team in the competition, it reaffirmed their status as the top team in their age group as they also took the honours last season.

The clash was gripping as the Capetonians powered their way to a 21-0 halftime lead before having to fight for the win. Western Province made good use of their speedy backs to touch down three times in the first half, but Eastern Province fought back strongly to close the gap on scoreboard to 28-24 in the dying minutes as they maintained their composure on attack. The Cape side, however, remained calm until the final whistle, which allowed them to seal the four-point victory.

In the other matches at the U18 Week on Friday, the Sharks made their presence felt early on against Border CD as they powered their way to a 26-12 lead, which paved the way for their 50-22 victory to end the East London side’s undefeated run. Mbali Mbonambi completed the tournament on a memorable note as she scored three of her team’s eight tries, while Ziphindile Ngubane kept the scoreboard ticking with four conversions.

Limpopo also showed their class as they cruised to a comprehensive 43-10 victory against Griquas thanks to their ability to find space out wide and break through the defence, which earned them seven tries to two by the Kimberley outfit, with Orielly Maluleka scoring twice.

Free State did well to capitalise on their try-scoring chances against the Leopards as they retained possession and ran hard on attack, with Noluthando Pampiri contributing three of their six tries in their 32-5 victory, with their solid defence seeing them leak only one try.

Hosts, the Golden Lions, held their nerve in a tough second half against the Blue Bulls in the Gauteng derby to secure a 24-12 victory after building up a 17-0 halftime lead. Flanker Jancke van Tonder played a key role as she scored two of the team’s four tries, while they limited their neighbours to two.

The Pumas fell short against Griffons despite a strong second-half showing to go down 29-27, with one conversion being the difference on the scoreboard as both sides crossed the tryline five times. Shoti Mohalali of the Griffons again made her presence felt as she scored three of their tries.

Boland’s successful goal-kicking, meanwhile, kept them well ahead on the scoreboard in their 22-10 victory against SWD, as they earned three tries to two by Pamela Khumalo of the George side. Boland’s Debra Fredericks scored one try, two conversions and a penalty goal in a fine display of her skills.

Zimbabwe also gave a good account of themselves as they maintained their composure against Border to register a 17-12 victory after holding a narrow 10-7 lead at the break. Both teams tried hard to stamp their authority, but Zimbabwe nudged through as they made better use of their chances.

A strong first half in the final match of the SA Rugby Girls U16 Week by the Sharks proved vital in their 31-23 victory against Eastern Province, as the Port Elizabeth outfit fought until the end in the hope of a victory.

The Durbanites dominated possession in the first half and showed patience on attack, while they defended solidly to take an encouraging 19-3 lead at the break. Eastern Province pushed back with intent as they applied sustained pressure on attack, and this paid off as they scored three tries to come within striking range of a victory in the dying minutes. But their efforts proved too little too late as the clock ran out, with the Sharks’ four tries – two of which were scored by Nokwanda Buthelezi – earning them the win.

In the other U16 matches, Western Province and the Pumas continued their winning ways to remain the only two unbeaten teams after the three day’s play.

Western Province outplayed Border 47-0 thanks to an impressive performance which saw them cruise to the tryline nine times, while they shut out their Eastern Cape counterparts completely. Inam Mbeki and Chenice Cornelius were instrumental in their exciting attack with five tries being scored between them.

The Pumas continued their fine form in the competition as they defeated hosts, the Golden Lions, 24-10 to complete their campaign unbeaten, thanks to their four tries to two by the home team.

SWD also finished the competition on a high with a rewarding 56-5 victory against Boland as their fine attacking form earning them 10 tries, with a hat-trick by Jo-Anne Monique Phillips, who also kicked three conversions for a personal total of 21 points.

An impressive five tries by Free State centre Malick Camara steered the Bloemfontein outfit to an emphatic 52-0 victory against the Griffons with the side crossing the tryline 10 times.

Griquas also ran riot on attack and delivered a solid defensive effort against the Leopards to touch down nine times for their 55-0 win with Charmell Visagie earning a hat-trick and Butrunicha Schefers scoring a brace and five conversions for her 20 points.

Border CD also finished the tournament on a winning note as they defeated Western Province B 34-17 thanks to their solid attacking form and ability to capitalise on their try-scoring chances. The Capetonians tried hard to force their way back into the match in the second half, but their efforts were not enough as Border CD maintained their rhythm on attack.

The clash between the Blue Bulls and Limpopo was closely fought as both teams gave everything on attack and defence, but in the end two tries by the Gauteng side to only two penalty goals by Limpopo handed them the edge on the scoreboard.

The SA Rugby Youth Weeks festival will continue on Monday, with the U13 Coca-Cola Craven Week and U16 Coca-Cola Grant Khomo Week tournaments at Hoërskool Diamantveld in Kimberley. 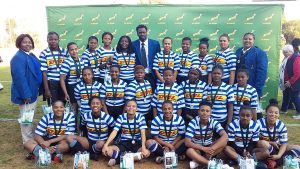 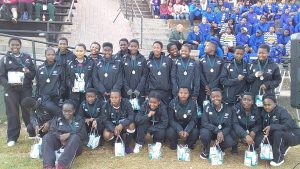