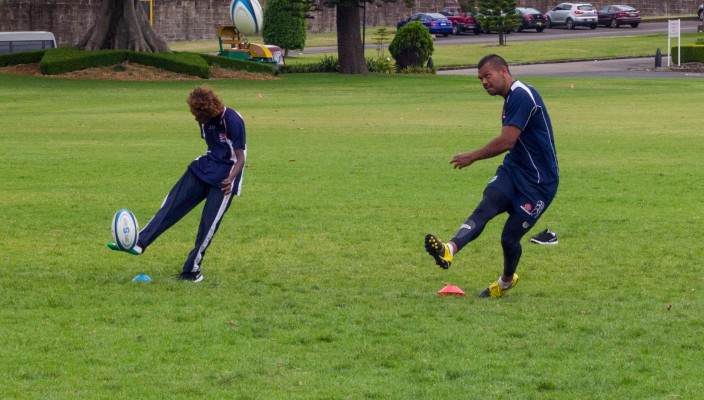 It wasn’t just the first time they’d laid eyes on the Waratahs, it was also their first time in Sydney, their first glimpse of the Harbour Bridge and for one, Toby Sandy, it was his first ever plane ride and the first chance ever to enjoy a look at the ocean, courtesy of a visit to the shores of the world-famous Bondi Beach.

This special learning group from Centralian Middle School for years 7-9, in the heart of Alice, is on an educational tour and after hearing about their adventure, prop Jeremy Tilse just had to invite them along to a Waratahs training session.

“They’ve never had the chance to see a game of rugby or a training session live and everybody deserves to enjoy the game, so I thought why not broaden their education with a quick rugby lesson,” enthused Tilse.

Not one of the boys has played rugby, their sports are soccer, AFL  and  motor  cross, but you wouldn’t have known it.  They had a ball and Kurtley Beale made them feel right at home.

Beale challenged the boys to a goal kicking contest and they were up for it, matching him kick for kick, on the short ones at least. Tilse was  delighted  with  his  team  mate’s enthusiastic  approach. “Kurtley was fantastic and they instantly connected with him.  It was great to see them having fun, Kurtley included!”

Waratah and Wallaby No. 8 Wycliff Palu gave the boys his interpretation of a rugby pass but it was hard to get hand-balling out of their system. The boys did like the big collisions at training and the Waratahs’ speed.

But first-up views of the Sydney Harbour Bridge and taking your first look at the ocean from Bondi Beach are hard to beat but the Waratahs going on to take the 2014 Super Rugby title would make this visit even more unforgettable.