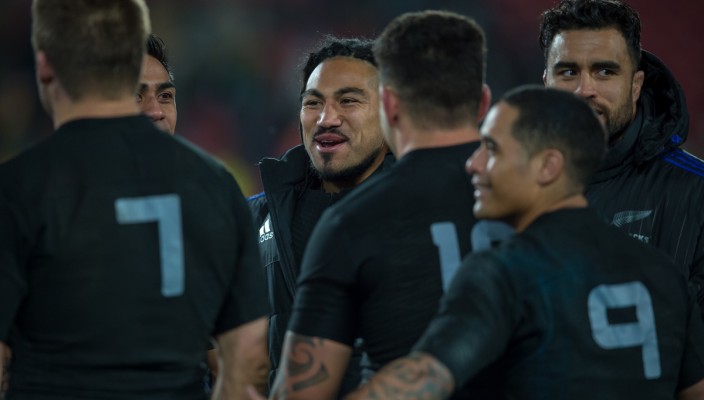 The All Blacks side has been named to play Australia in their Rugby World Cup 2015 Final at Twickenham, London, on Saturday 31st October (Kick-off: 4.00PM) has been named.

The team is (with Test caps in brackets):

All Blacks Head Coach Steve Hansen said: “We’ve really enjoyed the interaction with the people of England and Wales throughout the Rugby World Cup, as well as with our own Kiwi fans who’ve travelled and those who have stayed at home. We’ve been really well looked after by our various hosts around the UK and I know as a group we have enjoyed the Tournament, both on-field and off-field because of this.

“We came here as contenders for the Cup, just like everyone else. In our minds, we have never been defenders. We knew we would have to earn the right to progress through the Tournament so being in the Final is very satisfying in its own right, as it’s the first Rugby World Cup Final an All Blacks team has made in the UK. But the ultimate goal has always been to win it, so we are exactly where we need to be to try and achieve that.

“Both teams have arrived at the Final by different pathways. We’ve had the luxury of building game by game throughout the whole Tournament, whilst Australia have had to be at their very best right from day one. Mental fortitude and physical endurance, together with skill execution and sheer desire, will be the key ingredients come Saturday.

“We’ve had a great preparation so far this week at Pennyhill; the boys are feeling really fresh and energised. We’re building towards Saturday’s match with a growing sense of determination and real excitement and I couldn’t be happier with where we are at.

“We know that all our fans here and at home are as excited as we are. Once again, we’d like to thank them for all their good wishes and support, and we’ll be looking to put in a performance all of us can be proud of.”

* The All Blacks matchday 23 for the Test against Australia has an average age of 28 and has 1,339 Test caps of experience.

* This is the first time the All Blacks and Australia have met in a RWC Final. The sides have met three times in semifinals: in 1991, 2003 and at the last RWC in 2011. This weekend, Australia and New Zealand will be playing their 155th Test match. The All Blacks record stands at 105 wins, 42 losses and seven draws.

* Daniel Carter last weekend became the first visiting player to score 100 points at Twickenham. Carter has also kicked 21 conversions in this tournament. Only former All Black Grant Fox (30) and former Springbok Percy Montgomery (22) have kicked more in an RWC tournament.