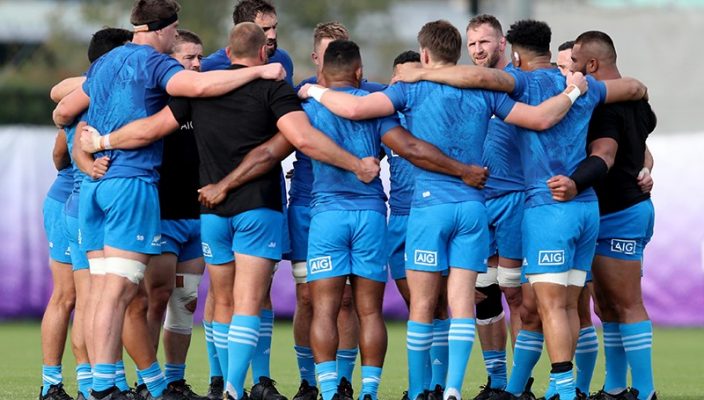 All Blacks team named to play Namibia at RWC2019

The All Blacks team has been named to play Namibia in their Rugby World Cup Pool Play match on Sunday 6 October at Tokyo Stadium, Tokyo. (Kick off: 1.45PM, 5.45PM NZT)


The matchday 23 is as follows (with Test caps in brackets):

All Blacks Head Coach Steve Hansen said: “In naming this team, we had to consider the short turnaround between the Canadian and Namibian games. We’ve managed to ensure that we’ve got plenty of fresh players starting this match.

“We’re very happy with where we are at after our first two games. However, the expectations going into the match on Sunday don’t change. We need to keep improving. In all games it’s important to nail the mental self-preparation, as it’s not about who you’re playing, it’s about your own personal standards.

“Our preparation on-field this week is all about getting the balance right over the next two days. It’s a case of not too much and not too little, from a physical point of view.”

Lock Samuel Whitelock will captain the side for the sixth time in a Test.
Hansen said: “Sam brings a wealth of leadership experience and is the logical choice to lead the team. It will be the first time he’s done it in a Rugby World Cup, it’s a great honour for him and something he’ll be proud of.”

Lock Brodie Retallick also makes a welcome return to the All Blacks side.
“It’s great to have Brodie back. There’s been some great work done by not only Brodie himself but also by the medical team. Obviously, Brodie is very excited to be in a position to pull the jersey back on,” Hansen said.

The squad naming also features Jordie Barrett named to play at 10 for the first time, with TJ Perenara his back up.

“Jordie can play multiple positions in the backline and we’re confident that he’ll handle the responsibility well. He has all the skillsets required and we’re looking forward to seeing him play there,” Hansen said.

The starting front row is Joe Moody, hooker Codie Taylor and Nepo Laulala, with Ofa Tuungafasi, Angus Ta’avao and Dane Coles coming off the bench. Patrick Tuipulotu is back up lock to Retallick and Whitelock, while the starting loose forward trio of Shannon Frizell at six, Sam Cane at seven and Ardie Savea in the eight jersey will be supported from the bench by Matt Todd.

In the backs, Aaron Smith starts at nine, outside Jordie Barrett are Anton Lienert-Brown and Jack Goodhue, while the back three are George Bridge and Sevu Reece on the wings and Ben Smith at fullback. As well as Perenara, Brad Weber and Reiko Ioane provide back cover.