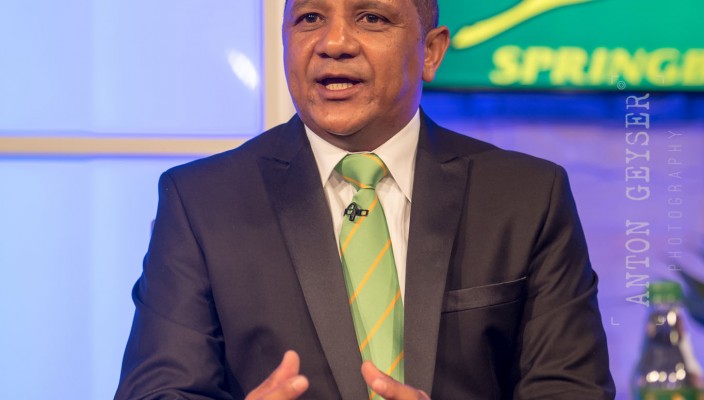 The 52-year-old former Springbok assistant coach succeeds Heyneke Meyer at a time when a number of veterans of the 2007 Rugby World Cup triumph have gone into retirement, including three of last year’s four captains.

“Allister’s appointment marks the changing of the guard at the top of Springbok rugby and is an exciting new departure for SA Rugby,” said Mr Hoskins.

“It is a watershed moment for our game with new players developing alongside a spine of experience and it was the right time to have a new man guiding the Springboks for the foreseeable future.

“Allister was the outstanding candidate in terms of his rugby credentials, his understanding of our unique South African transformation imperatives and also in the image he will present as Springbok coach. I am delighted to welcome him back into the Springbok fold.

“The Springbok coaching job is an enormous challenge but Allister has the full support of us at SA Rugby and we will be united in our efforts to continue to make Springbok rugby strong. I want to wish him well in his new job, I also want to pay tribute to Heyneke and his management team for their dedication and service to Springbok rugby the past four years.”

Coetzee is arguably the most experienced man to be given the Springbok head coach’s job. He will draw on his personal involvement in 66 matches in the Springbok backroom in 2000 and between 2004 and 2007. He also has an exemplary record at Currie Cup and Vodacom Super Rugby record.

Coetzee said he was extremely honoured and humbled to coach the Springboks.

“This job comes with a huge amount of responsibility because our passionate fans rightfully demand the best from the Springboks at all times,” said Coetzee.

“Rugby ignites so much passion in our country. The team inspires all our people and every young rugby player in our country aspires to be a Springbok one day. I know full well that coaching the Springboks requires a lot of dedication, patience and hard work. I am very excited and grateful for this opportunity.”

SA Rugby CEO, Jurie Roux, said that Coetzee had been recommended for the role by the SA Rugby High Performance Committee, whose recommendation had been accepted by the Executive Council and the General Council over recent weeks.

He said that Coetzee emerged as the best candidate for the role following a robust and thorough process. “Allister was the most outstanding candidate based on his excellent track record as a coach at provincial and Vodacom Super Rugby level, which makes his appointment a great one for SA Rugby,” said Roux.

“He proved himself on the domestic front by winning the Currie Cup twice with DHL Western Province and leading the DHL Stormers to three SA Conference titles in the extremely tough Vodacom Super Rugby competition. And we all know of his contributions as assistant coach to the Springboks, culminating in success at the 2007 Rugby World Cup.

“We at SA Rugby are pleased with his appointment and we know we have the right person to lead us into the next and hopefully exciting phase of Springbok rugby. We’re also grateful to Kobe for allowing Allister to join us in South Africa.”

Coetzee had already been involved in a number of planning sessions with SA Rugby staff said Roux. His first official engagement as a coach will be the opening Test of the year against Ireland in Cape Town on Saturday, 11 June.