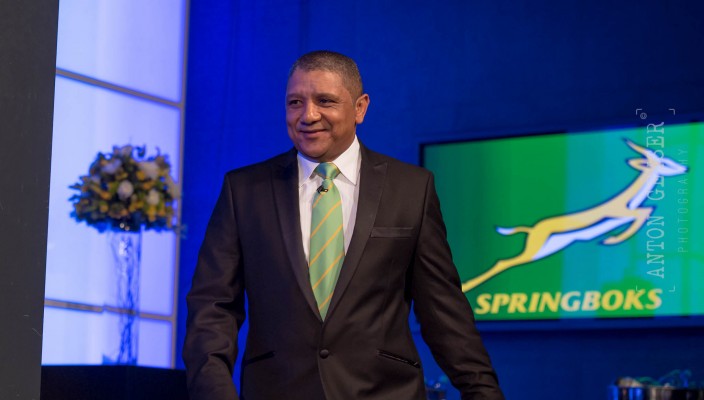 Allister Coetzee has been involved with rugby since 1974, first as a player and then later as a team manager, assistant coach and head coach.

Coetzee was born on 23 May 1963 in Grahamstown. He was an outstanding scrumhalf in the period before rugby unification in South Africa, and captained the SARU national team, as they were called back in the days, between 1988 and 1991 following his debut in 1985.

He was selected for the Junior Springboks in 1992 and played in the Currie Cup for Eastern Province between 1992 and 1996, as well as in the 1994 Super 10 competition for the Eastern Cape team.

Coetzee coached the Emerging Springboks in 1998, a Vodacom All-Stars team in 1999 and the South African Under-23 and South Africa ‘A’ sides in 2000, when he was also one of the Springbok assistant coaches to Harry Viljoen.

He then became head coach of Eastern Province in 2001, the first black head coach of a provincial rugby side in South Africa. He remained head coach for the EP side until he resigned in July 2003.

Coetzee was appointed as assistant coach to the Springboks in early 2004, where he formed a successful coaching trio with Jake White and Gert Smal until the end of 2007, capping off four memorable years with the winning of the 2007 Rugby World Cup in France.

In 2005, he was also appointed assistant coach for the Cats for the 2006 Super 14 season, a position he held for only one season.

Coetzee led the DHL Stormers to three South African Conference titles during his tenure as DHL Stormers head coach, and he was also successful in his role as coach of DHL Western Province, where he won the Currie Cup twice, in 2012 and 2014.

He remained with the DHL Stormers until the end of the 2015 Vodacom Super Rugby season, when he moved to Japan to take over as head coach of the Kobe Steelers.

1989-1991: Represented and captained SARU prior to unification