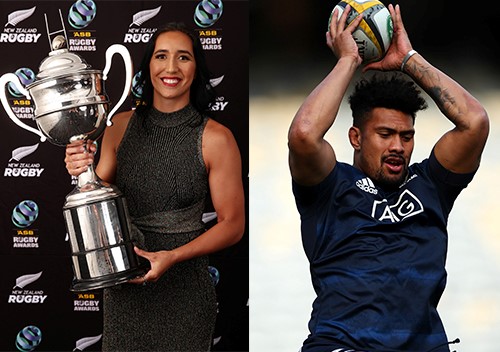 Ardie Savea collected three awards at this year’s ASB Rugby Awards in Auckland tonight, including the supreme Kelvin R Tremain Memorial award for the overall Player of the Year, bookending a year of consistently remarkable performances from the All Blacks and Hurricanes loose forward.

Savea reached a new level of play in 2019, starting eight of the All Blacks 10 Test matches, and he showed strength and versatility across the back row. Savea was a monster presence on the field in attack – often taking defenders for a ride – and on defence – he displayed a freakish ability to turnover crucial ball at the breakdown.

In another night for the history books, Black Ferns Sevens captain Sarah Hirini won the Tom French Cup for Māori Player of the Year, the first woman to do so in the 70 year history of the award.

This year’s Steinlager Salver, the New Zealand Rugby tradition of recognising an outstanding contribution to rugby, went to a shocked Steve Tew who leaves New Zealand Rugby at the end of the year. The award is determined by the NZR Board and event staff were forced to ingenious means to keep the award secret from Tew who would normally have full visibility of all awards.

The NZRPA Kirk Award was presented to Josh Blackie, Seilala Mapusua and Hale T-Pole for their contributions to the game off the field.

Canterbury’s Chelsea Bremner was presented with the the Fiao’o Faamausili Medal for Player of the Farah Palmer cup, and Chase Tiatia (Bay of Plenty) took out the Duane Monkely Medal for his thrilling form during the Mitre 10 Cup.

Canterbury’s Fletcher Newell won New Zealand Age Grade Player after he was named player of the Jock Hobbs Memorial Under 19 tournament and was selected for the New Zealand Under 20. North Otago’s 2019 stand-out Josh Clark won Mitre 10 Heartland Championship Player for his consistent efforts with the Meads Cup winning side.

Rugby World Cup 2019 referee Paul Williams won his first New Zealand Referee of the Year Award. Ian Spraggon from Bay of Plenty won the Charles Monro Rugby Volunteer of the Year recognising 11 years of voluntary work with the Union. His nomination form noted he worked tirelessly behind the scenes, he never asked for recognition but has been responsible for changing kids’ lives through rugby and has been the ultimate role model. A part of the Disciplinary Committee, this year the union has seen a decline in incidents – a testament to the work Spraggon and the committee have invested.

TJ Perenara’s thrilling sideline-skating try during Rugby World Cup 2019 was voted by fans as the Sky Fans Try of the Year.

New Zealand Rugby Chair Brent Impey congratulated all award winners.
“It has been a wonderful and successful year right across rugby. It has been a remarkable year again for the Black Ferns Sevens and the Crusaders who have won coach and team awards.

“I am delighted that 70 years after the Maori Player of the Year award was first presented in 1949 to Johnny Smith of North Auckland, Sarah Hirini becomes the first woman to lift the Tom French Cup. She is a player whose strength and leadership on the field, make her an appropriate winner of this award.

“As for Ardie, what an absolute pleasure he has been to watch this year. Both as a Hurricane and an All Black, this young man has been in sublime form and we hope to see much more of him next year.

“Congratulations to all winners this evening – they deserve their accolades and we welcome them to the history books.”

ASB head of community and sponsorship Mark Graham said the awards recognised the effort and accomplishments of everyone involved in the sport.

“We know from previous years that the calibre of finalists for these awards is always impressive, and this year is no different. We would like to congratulate all of the winners on their achievements, from the players themselves through to the volunteers, coaches and referees who make this sport what it is in New Zealand. It’s been a huge year for rugby and to be able to celebrate all of the hard work and success is incredibly important,” said Graham.