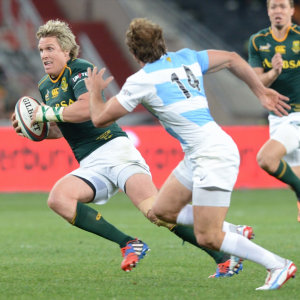 LONDON, 23 Oct – Argentina coach Daniel Hourcade has named his team to face Australia in their semi-final which kicks off at Twickenham at 16:00 on Sunday.

He has made one change to the starting line-up that defeated Ireland in the quarter-finals. Marcelo Bosch (pictured) returns from suspension to replace Matías Moroni at outside-centre. Bosch missed the quarter-finals after being cited for a dangerous tackle against Namibia on 11 October.

The single change is Los Pumas’ fewest between successive World Cup matches since 2007, when they named an unchanged starting line-up twice.

Juan Imhoff’s five tries at RWC 2015 are a Pumas’ record in a single World Cup campaign. His seven career tries are a team record in the competition.

Argentina will contest their first RWC semi-final in eight years. In a losing cause against South Africa in 2007, Horacio Agulla, Juan Martín Hernández and Juan Martín Fernández Lobbe started and Juan Manuel Leguizamón came on as a replacement.

Following the quarter-finals, Nicolás Sánchez was second at RWC 2015 in points scored. His 74 points were second to Scotland’s Greig Laidlaw’s 79.

One Argentina player has finished as the tournament top scorer at the World Cup. In 1999, Gonzalo Quesada’s 102 points led the charge.