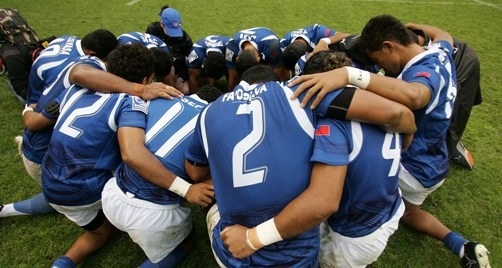 Today Auckland Rugby mourns the loss of the one of this union’s much-loved rugby personalities.

Papali’itele Peter Fatialofa (54) died suddenly this morning in Samoa and his passing has left shock waves across the rugby community.

From the Ponsonby Rugby Club, Fatialofa played 71 games for Auckland in the front row, debuting in 1984 and for the following eight years was a member of the side during one of Auckland Rugby’s most dominant eras.

“He was the ultimate team man – on the field he was huge and off the field such a gentleman. I am so sad for Anne and his family – we have all lost a brilliant man.”

Whetton recalls Fatialofa was given the important role of ‘Keeper of the Shield’.

“When we won the Ranfurly Shield in 1985, ‘Fats’ was charged as being the Keeper of the Shield. It was his job to keep it safe, to make sure it came on the road with us – he had to know where it was at all times, and I think a lot of those times it was at his house!”

A proud Samoan, Fatialofa was one of the first New Zealand-based players to play for Manu Samoa. He captained the side in their first Rugby World Cup campaign in 1991 at which they made the quarter-finals. Fatialofa played for Manu Samoa until 1996, the same year he was made a Member of the New Zealand Order of Merit (MNZM) for his services to rugby.

His status in Samoa is legendary and his service to Samoan rugby continued to the end, as he was coaching the women’s Samoan rugby team (Manusina) in their quest to play at next year’s Rugby World Cup in France.

Prior to that, Fatialofa had coached the East Tamaki premier side and contributed to the Auckland Rugby Union Council of Delegates representing Samoan rugby interests.

Off the field, Fatialofa set up a successful piano-moving business called Peter Fats, Piano and Furniture Removal which continues to this day. Fatialofa has maintained his love for both New Zealand and Samoa through his Samoan adventure and experience business, Fats Tours.

On behalf of the Auckland Rugby community, we extend our sympathies to the Fatialofa family and friends for the loss of such a well-loved and respected man.