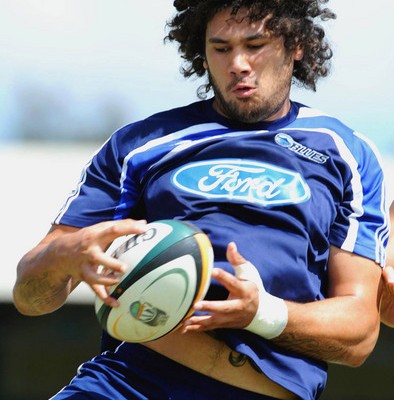 Auckland head coach Wayne Pivac has made three changes to the starting XV for Saturday’s clash against Canterbury at Eden Park.

In the absence of Piri Weepu who is away with the All Blacks in Argentina, Wayne Ngaluafe starts at halfback while Tenina Sauileoge is named on the right wing in place of the injured Vince Aso.

After coming off the bench to make his Auckland debut last week, Kara Pryor will start at openside flanker as Sean Polwart switches to the blindside to replace the injured Joe Edwards.

Pivac said he was looking forward to watching the athletic Pryor in action in such a big match.

“Kara is very quick – you could throw him on the wing because he’s got a lot of pace. He pops up in all the right places, he’s not overly big in stature but certainly he punches above his weight. He got a start in the pre-season and played very well and he got an opportunity to come off the bench in a bit of a cameo last week so it’s going to be interesting to see how he goes and he’s certainly looking forward to the challenge.”

With Edwards (dislocated shoulder), Aso (hamstring strain) and Patrick Tuipulotu (broken jaw) all out for the season, youngsters So’otala Fa’aso’o and Melani Nanai will get the opportunity to make their Auckland debuts after being named on the bench.

Pivac said the depth of his squad would certainly be tested against the Red and Blacks.

“It’s a frustration and just the nature of the game, you can’t do anything about it,” Pivac said of the injuries.

“Last year we had a pretty good run with injuries but this year we’ve had three non starters at the start line from Super Rugby out for the season so to get a few more during the season and then an All Black call up or two, it’s calling on our depth most definitely.

“This week we’ve got another couple of youngsters having a taste of ITM Cup for the first time so it’s a great opportunity for them and certainly it’s going to be a test of both squads in a big game having some big name players if you like out.”

On Saturday Auckland will celebrate Heritage Day, acknowledging and saluting the many great players that have gone before them, and Pivac said it would be tremendous to chalk up a win against Canterbury at Eden Park.

“We’ve enjoyed playing at home this season and last season, to date during that time we haven’t dropped a game at home, touch wood, but certainly what a great challenge to be playing at home against the number one team for the last five years so we’re really looking forward to it.

“The ex-players love coming along no matter how long they’ve been out of the game because the Auckland jersey means a lot to them and it means a lot to our players, just as the Canterbury jersey does to their guys so it’s great to have them there and certainly we’ll be recognising them before the game.”

The Auckland team to face Canterbury at Eden Park on Saturday night is:

N.B: Tickets are available from just $10 for adults and kids 14 and under are free. Call 0800 111 999. For people travelling to the match in Auckland – travel on selected trains with your match ticket.