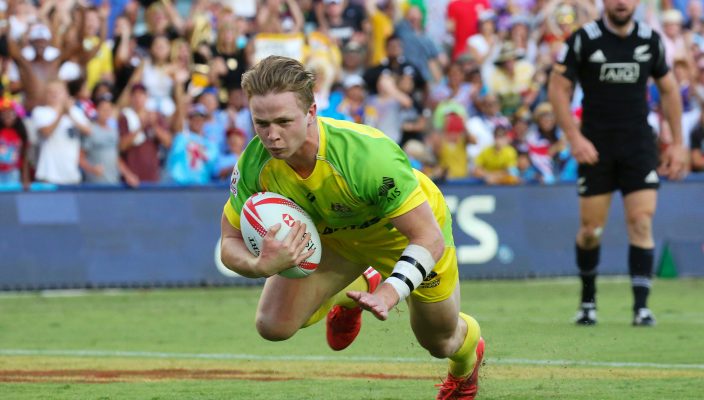 Qantas Australian Men’s Sevens teenage winger Henry Hutchison has won the HSBC World Rugby Sevens Rookie of the Year which was presented at an end-of-season awards ceremony in London earlier this morning (AEST).

The 19-year-old from Roseville in Sydney’s northern suburbs played in seven World Series events during the 2015-16 season in his breakout year on the circuit, scoring 27 tries as Australia finished fourth in the final standings and its best placing in six years.

Hutchison joined the Australian Sevens program on a permanent basis in August 2015, making his full national debut three months later at the Oceania Regional Olympic Qualifier in Auckland, New Zealand which Australia won to book a place at the Rio 2016 Olympics.

Henry Hutchison said: “I’m absolutely thrilled to win this award. I must be honest though and admit that I haven’t earned this by myself but with the help of my team-mates and the coaching staff at the Australian Sevens program.

“Looking back, it feels like a lifetime again that I was selected for the Commonwealth Youth Games in Samoa. To go from there to having the backing of Tim Walsh [then interim Head Coach] to play in a tournament like the Olympic Qualifier in Auckland gave me such confidence. I simply couldn’t believe I was in the top 12 for such an intense and crucial tournament for Australian Rugby.

“From there, it was just a snowball effect – making my debut in Cape Town which was another stepping stone onto Sydney, Vancouver and so on. This season has been an unbelievable experience and I have so much to learn still which makes this journey so exciting.”

On his relationship with current Head Coach Andy Friend, Hutchison added: “I consider Andy [Friend]  as more than a Head Coach – I see him as a friend and a mentor. He has taught about being part of a family and a healthy culture. Andy has give me more opportunities and I just want to go out on the park and pay him back with results.

“Fourth in the World Series is a big effort from the entire program but we can get better. And I firmly believe that whoever the 12 players are selected for the Olympics that we have more than enough talent to get on that podium at Deodoro Stadium come August.”

The final 12-strong Australian Men’s and Women’s squads chosen for the Rio 2016 Olympics will be announced on Thursday 14 July in Sydney.