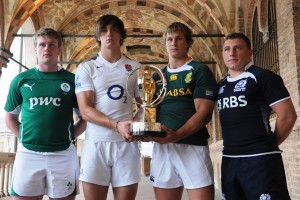 SA U20 captain Arno Botha on Tuesday said his team would not be looking further than their Pool C clash against Scotland on Friday when they kick-off their 2011 campaign at the IRB Junior World Championship in Italy.

Botha addressed the media at the official launch of the 2011 IRB Junior World Championship in Padova. Captains and coaches of the 12 competing teams were present at the launch of this year’s tournament that has now become one of the most eagerly-awaited junior international competitions.

The tournament kicks off on Friday when hosts Italy take on three-time defending champions New Zealand. The Baby Boks play Ireland on the 14 June before wrapping up their Pool C fixtures against England on 18 June.

“There’s a lot of talk doing the rounds here in Italy of who our toughest opponents are going to be in this tournament, and for now, our only focus is on doing well against Scotland,” said Botha.

“For us, it’s going to be about getting the basics right. It’s our first match at the World Champs, so we not going to aim to be too fancy. We know what we have to do, and there are certain objectives we’ve set. One of those objectives is to tick as many boxes as we can early on in the tournament. We’ve got Scotland; thereafter our focus will shift to Ireland, and the England.

“Its three northern hemisphere teams up front in the competition which provides us with certain challenges we have to accept. We know what our strengths are, and we’ll try and play within that framework.”

Botha added that the Baby Boks will benefit from the experience that centre Francois Venter, winger Wandile Mjekevu, scrumhalf Lohan Jacobs and flanker Siya Kolisi will add to the squad. These four players competed in last year’s tournament in Argentina.

“We’ve got players who previously competed at a tournament such as this, and their presence here has helped the rest of the squad who are playing in their first International tournament,” said Botha.

“We’ve had some productive field sessions since our arrival here in Treviso, and there’s a great sense of focus within the squad to do well this year. There’s been support letters coming from SARU and our team sponsor Absa, and we’re expecting quite a number of the parents to arrive in Italy during the next few days to support the guys. The build-up has been good, we’re just waiting to play our first game now.”