Bakkies' World Cup over but vows to return to Test arena 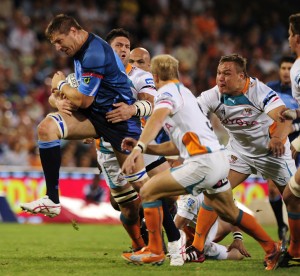 Bakkies Botha has been forced out of the Springboks’ Rugby World Cup campaign because of an Achilles tendon injury. The announcement was made on Thursday after the 76-Test veteran suffered the injury during training 24 hours earlier.

The lock leaves New Zealand on Friday to become the second Springbok player in a week to be forced out. Centre Frans Steyn departed on Tuesday because of a shoulder injury.

A decision on a replacement has been postponed pending the outcome of Sunday’s quarterfinal against Australia in Wellington.

Botha, 32, said that it had been an emotional decision to admit his World Cup was over, but that he still intended to return to Springbok team.

“I am a person who normally keeps my emotions out of sight but it was emotional to talk to the team this morning and tell them I would be going home,” he said. “I told the team to cherish every moment of their time in the green and gold because you never know when it is going to be your last.

“I’m very disappointed – after all the hard work that has been put in over the past few months – but it’s not about me, it’s about the team now and there’s still a big job to do. I’ll be sitting at home with my family on Sunday with a tear on my cheek as the team takes on the Wallabies.

“But we can’t stop here – there are still three games left to play.”

Botha said he would see a specialist on his return in order to determine what course of action was required so he could be ready to take up his three-year contract with Toulon in France on November 1.

“This is definitely not the end of my Test career as far as I am concerned,” he said. “I’ll be aiming to give 100% to Toulon to help them get into the Heineken Cup and I’ll still be available for South Africa next year.

“I still have the desire to play for my country and that will be there for as long as I play. It’s a special thing to pull on this jersey and that hunger has not left me.”

Botha made his Test debut against France in 2002 and was appearing at his third Rugby World Cup – having collected a winner’s medal at the 2007 tournament. He played in the Pool D wins over Fiji and Namibia in this tournament but separate Achilles and hamstring injuries kept him out of the matches against Wales and Samoa.

The latest Achilles tendon injury was a new injury, he said, affecting the opposite ankle. “I knew straight away that something wasn’t right,” he said. “I knew I wasn’t going to be 100 percent and with great players like Victor [Matfield], Danie [Rossouw] and Johann [Muller]all fit there was no need for me to hang around and be a distraction to the team.”

Meanwhile winger JP Pietersen successfully completed a fitness test on his injured knee at Thursday’s training run and was declared fit to take his place on the right wing.