Basson out of Springbok Tour

Nov 14 • International, World Rugby • 1458 Views • No Comments on Basson out of Springbok Tour 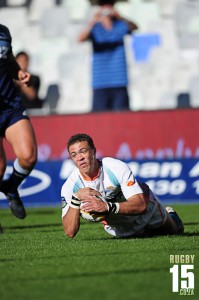 Wing Bjorn Basson has been forced out of the Springbok tour of the UK and Ireland because of injury. The Vodacom Blue Bulls player sustained a grade 2 right ankle sprain in Saturday’s 29-25 win over Wales at the Millennium Stadium. A decision on whether to call for a replacement will be taken in due course.

Meanwhile coach Peter de Villiers hailed the character of his team as they withstood a fierce, late Welsh onslaught to record a second successive tour victory, following the 23-21 win over Ireland eight days ago.

“The defensive effort demonstrated the character of this team,” said de Villiers. “I was very happy with the spirit we showed but we know there’s a lot of work still to be done in terms of performance.

“Our first-half play left a lot to be desired but we spoke about it at half time and tightened up in the second half and produced the rugby this team is capable of to take the lead.

“We’ve had two hard fought victories but we have yet to produce an entirely satisfactory performance so there’s plenty for us to work on this week.

“It has been three weeks of hard work for the players and physically they have stood up well to the challenge and we can expect more of the same from Scotland.

“The last time we were in Edinburgh there were only four points in the game (South Africa won 14-10) and we lost here in 2002 and we’ll keep that at the front of our minds rather than anything else this week.”