One of the biggest clashes of Super power School must be Grey College (Blou machine) vs Affies (Die Wit Bulle) on Youth Day 16 June 2011 at Grey College. Each year its a titanic clash with these two elite schools, besides this derby Grey’s century old rival is still Paul Roos Gymnasium which takes place end of their school rugby year calendar usually in August.

Affies has been showing signs, same as what Waterkloof did, that we could witness Grey loosing this year against them, Waterkloof however failed, the pressure is for sure on Affies not to fall in that same pit Waterkloof did. Waterkloof eventually played against 14 Grey boys and was leading at halftime & should have used that opportunity to put Grey behind by larger score margins & win it at the end. I’m almost certain Affies wont make that same mistake Waterkloof did.

We find that Grey strength is the 2nd half, its almost as they start shifting gears, very much like the All Blacks does. For Affies to take this one they need to build a big lead in 1st half, which is Grey weakness & play with absolute discipline.

Affies has a very dangerous back-line, extremely good fly-half & full-back, Affies forwards are much bigger & stronger than the Grey pack, so one could expect a physical game that will be taken

One thing we have learned from under estimating the power house of school rugby, is that if you do so, you will get hammered, Grey has a class team, they love playing under pressure & like the All Blacks always seem to pull it off when the occasion demands it.

There are thousands of fans, families & friends attending this derby. 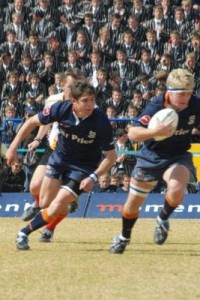