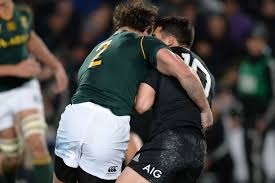 SANZAR Judicial Officer Terry Willis from Australia has removed a red card from the disciplinary record of Bismarck du Plessis. Du Plessis was issued with a red card after receiving two yellow cards during the match at the weekend between New Zealand and South Africa in The Rugby Championship.

The yellow cards were issued in the 17th and 42nd minutes of the match between New Zealand and South Africa at Eden Park in Auckland on 14 September 2013.

The SANZAR Judicial Hearing was held via teleconference on 16 September. Terry Willis granted an application made by Gerrie Swart who appeared on behalf of the player, for an expedited hearing. The hearing was originally fixed for the 17th of September. At the hearing, Terry Willis was assisted by former professional player David Croft from Australia.

Submissions were made on behalf of the player and the video footage was reviewed. The Judicial Officer found that the decision made by Referee Romain Poite to issue a yellow card as a result of the tackle by du Plessis on Dan Carter was wrong, as it was within the Laws of the Game.

No further sanction was imposed on the player, however the second yellow card remains on his record for the remainder of The Rugby Championship.