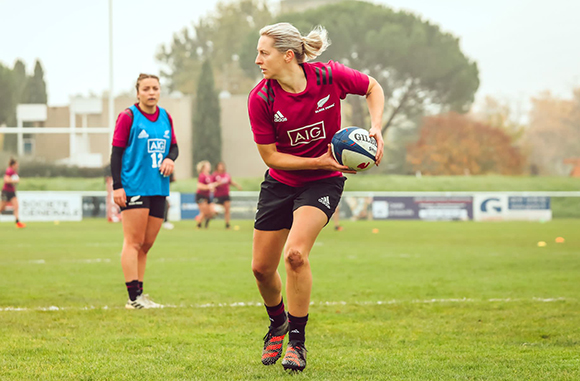 The Black Ferns team to face France, at Stade de Hameau in Pau on Saturday (3pm kick off / 3am Sunday NZT) has been named.

Coach Glenn Moore has made three changes to the starting line-up, with Dhys Faleafaga and Kelly Brazier returning from injury, while young lock Maia Roos is promoted from the bench.

Brazier replaces the injured Grace Brooker who underwent surgery on her knee on Monday after sustaining an injury in the England Test. Faleafaga comes in for Alana Bremner and along with Mikaele-Tu’u will bring a dynamic presence to the back of the scrum.

Canterbury hooker Georgia Ponsonby is in line for her Test debut off the bench, while vice-captain Eloise Blackwell returns to the match day 23 after sitting out last week.

Moore said that France are renowned for their unpredictable play and present a new challenge.

“We are still developing this squad as a whole. We were disappointed with the score line against England last week but there were passages where we played well so we need to build the continuity, so we are playing like that for longer periods.

“The French are flamboyant and play a bit more of an unstructured game so we have picked a side we think will suit that,” said Moore.

On Faleafaga and Mikeale-Tu’u, Moore said he has been impressed with the 21 and 19-year-olds respectively.

“They are both fast, strong athletes. Liana played so well in her first start last weekend and Dhys is a real athlete. We need to look at different combinations this tour, so I am looking forward to seeing how they go.

Brazier returning at second five-eighths is another combination Moore is interested in testing, the veteran has played in the 10, 12, 13 and 15 jersey across her 40 Black Ferns Tests.

“Playing Kelly at 12 gives us an opportunity to have two 10s on the field – we’ve done that with her before and this time we get to see her in combination with Ruahei and that is something we think is important looking ahead to next year. It will bring a different style to our backline and that’s exactly what we want to test.”