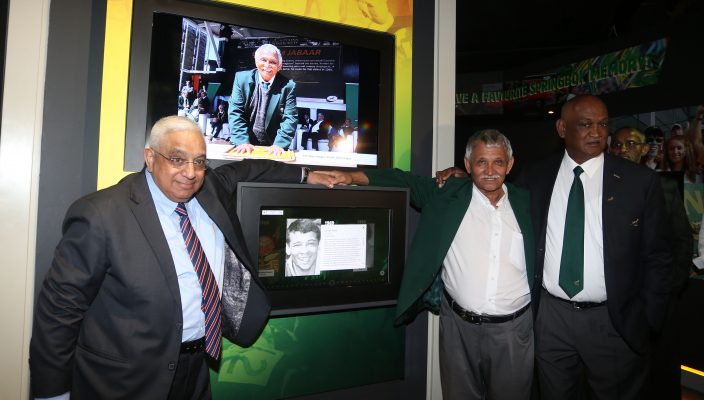 Black Rugby history A to Z launched by SA Rugby

SA Rugby launched what it hopes will grow into the definitive A to Z of Black Rugby, at the Springbok Experience Rugby Museum at the V&A Waterfront in Cape Town on Thursday.

The touch screen installation – which was developed with the help of funding from the National Lotteries Commission – is the first stage of an ambitious project to collate the often ‘hidden’ history of black rugby in South Africa until the sport’s unification in 1992.

The objective of the work is to capture the A to Z of black rugby prior to unity. The biographies of all 409 players to have appeared for the pre-unity African, coloured and non-racial rugby boards will be featured in due course, as well as the stories of clubs, trophies, administrators, federations and other personalities or events that may have shaped the development of black rugby.

Mr Mark Alexander, president of SA Rugby, said at the launch that the work was a first step to filling an embarrassing vacuum in the story of black rugby.

“The story of black rugby has increasingly been brought out of the shadows by the work we have done at The Springbok Experience and in the heritage field over recent years, but there is still not a single point of reference where anyone can go and discover the hidden story,” said Mr Alexander.

“In time we hope to have created a ‘one-stop shop’ where it is possible to access the stories and records of all the significant people and institutions that went into creating the vibrant story of black rugby in South Africa in the pre-democracy era.

“The resource we will have at the end of the process we plan to make available as widely as possible.”

SA Rugby has renewed its appeal for public support to provide stories, pictures and artefacts. “The existing record is patchy, dispersed and far from complete,” said Mr Alexander. “

“We are keen to receive photographs, newspaper cuttings, programmes and old playing jerseys from club, provincial or national players and any brochures or other mementoes that may help us tell the story.

“We are starting with national players, clubs and both provincial and national boards but the nature of a digital installation means we will be able to continuously update the display.”

Mr Alexander thanked the National Lotteries Commission for the financial support, which had made possible the development of the project.