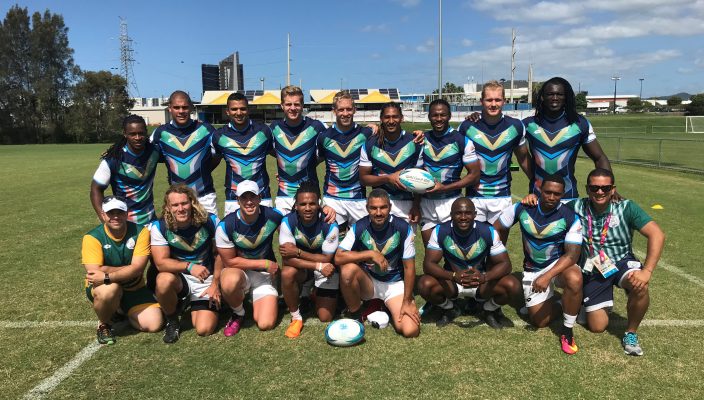 There are a number of reasons for the Springbok Sevens team to be upbeat about their participation in the 2018 Commonwealth Games and both Blitzboks coach, Neil Powell, and captain, Philip Snyman, see their involvement with Team South Africa as crucial to their development as a team.

The Blitzboks are defending the gold medal won at the 2014 Commonwealth Games in Glasgow. Powell was forced to call up Selvyn Davids in in place of Ryan Oosthuizen, who injured his hamstring in Hong Kong. A scan in Gold Coast revealed a muscle tear which has ruled him out for the Games.

According to Powell, a successful defence of that medal is only one of the reasons why they are loving their time at the Gold Coast.

“Our participation here is important in more than one way,” said Powell, who also coached the team at the previous Games.

“We are not only hoping to win the gold medal again, we are also using this opportunity to align with the multi-coded aspect of the games.

“We are already planning the next Olympic Games, in 2020, and see this as a trial run towards that. We made some mistakes in this regard leading up to Rio 2016 and want to make sure it does not happen again.”

The Blitzboks won bronze in the inaugural Rugby Sevens tournament at the Olympics in Rio de Janeiro.

“This time we hope to get our alignment and approach right – this is a once-off tournament and it needs to be approached like that. We see this as a dress rehearsal for 2020,” Powell explained.

Powell admitted that careful planning was key for the 2017/18 season, with the HSBC World Rugby Sevens Series, Commonwealth Games and Rugby World Cup Sevens all scheduled in the same year.

“It is a challenging year with three main events and the key will be on how we manage the players through the season,” said Powell.

“We needed to plan properly, with the importance being the well-being of the players. That was one of the reasons why we had a young team in Hong Kong last week, for example.”

The coach is keen for the tournament to start: “There are a lot of positives here. We have played here before, we know the stadium and most of the guys also played at the previous Commonwealth Games. So there will not be an element of surprise.”

According to Snyman, the Blitzboks want to be successful in every tournament they partake in: “The Commonwealth Games only comes around every four years, so we want to use that once-off opportunity as well.

“For us to dominate sevens, we must not only do well in the World Series, but also in tournaments such as this one.

“We have learned lessons over last couple of seasons, so this will be a good test for us. It is almost like our final exam, to see whether we prepared as well as we thought we did.”

Being part of Team South Africa is an also a massive honour and boost for the team, the captain explained: “We share the village with other world class athletes such as our swimmers and athletics team, and that its great be to part of such a great group.”

South Africa’s fixtures at the Robina Stadium is (SA times):